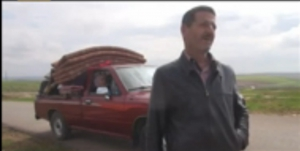 During the first few days of 2014, several demonstrations took place under the slogan “Bashar and ISIS are one… Down with ISIS and Assad” in areas controlled by the Islamic State in Iraq and Syria, now known as ISIS.

These demonstrations called for the fall of the organization which had gradually taken over most of the opposition-controlled areas in the north of Syria in the latter half of 2013. They began after the killing and arrest of leaders and members of various opposition factions and the defeat of their brigades, such as the Liwa Ahfad al-Rasool in Raqqa and Liwa Asifat al-Shamal in the city of Azaz in Aleppo province.

Following the demonstrations, the opposition announced an “armed revolt” against ISIS in the provinces of Raqqa, Aleppo, Deir al-Zor and Idlib. On January 17, 2014, ISIS retained its monopoly in Raqqa and withdrew from Idlib, a province with a population of around 2.5 million. It remained in a few pockets in Jisr al-Shughour, and withdrew completely in March.

ISIS left Idlib without a fight in most areas thanks to successful mediation that convinced its fighters to withdraw peacefully.

The armed opposition factions which fought ISIS in Idlib are Souqour al-Sham and Ahrar al-Sham, part of the Islamic Front. Another group that fought ISIS is the  Jabhat Thouwar Souriya, which is part of the Free Syrian Army and includes various non-Islamist battalions. These three factions are present in most of the opposition-controlled areas of Idlib, in addition to the Nusra Front, the official Al-Qaeda affiliate in Syria, and Liwa Dawood, an ally of ISIS which often played a mediating role. The latter’s presence is limited to Binnish, Sarmeen, and Tiftanaz.

Syrian President Bashar al-Assad’s forces control about a fifth of Idlib province, primarily in the north and west, which includes the administrative centre of the city of Idlib, the road that connects the province with the Syrian coast, and Ariha and Jisr al-Shughour. They also control areas in the south of the province, including Khan Shaykoun, the Shia-majority city of al-Fouaa and some surrounding villages, as well as strategic military outposts on the road that connects Idlib to Hama in Wady al-Dayf and Hamidiyya, and to Latakia in Al-Mastoma.

Khan Shaykoun, around 65 kilometres south of the city of Idlib, has been the site of fierce battles between the opposition and the regime since February 19. The opposition forces include the Islamic Front (represented by Souqour al-Sham, Ahrar al-Sham, and Jaysh al-Islam) and the Nusra Front, in addition to various other armed factions such as Hay’at Dourou’ al-Thawra, Hay’at Himayat al-Madaniyeen, Liwa al-Umma, Jund al-Aqsa, and Mujahidu al-Sham.

The objective of the battle of Khan Shaykhoun is to secure the international road that passes through it, thereby cutting off supplies to the military outposts of Al-Hamidiyaa and Wady al-Dayf near Maarat al-Nu’man. Securing the road will also move the battles from opposition-controlled Idlib to Hama, which is still mostly under regime control. The opposition has also secured locations in the town of Mourik in the Hama  province which lies only  seven kilometres south of Khan Shaykhoun. Most of Khan Shaykhoun’s 50,000 residents left when the fighting started.

“In the first three days we were able to liberate three checkpoints,” said Colonel Jamal al-Na’asan of the Islamic Front, a prominent figure in these battles, in an interview with Damascus Bureau in February. “We face fierce resistance from the Salam checkpoint, which is more akin to a fortified military base. Despite this, we liberated three buildings of the nine it controls in the western part of the city,” he said.

“We did not receive any support from the National Opposition Coalition. A Concours [anti-tank guided] missile costs us 20,000 US dollars, and a tank shell 4,000 dollars,” he added.

Lieutenant Colonel Jamal Alloush, a commander of the Souqour al-Sham Brigades, believes that the opposition has weapons capable of “liberating” the areas controlled by the regime if it unifies and stops engaging in discussions of how the winnings will be split before each battle.

“We know the main reason for not securing victories, and it is not a lack of weapons or ammunition,” he explained.

Alloush sees no point in starting a battle over the city of Idlib before securing the strategic city of Ariha, which lies around 20 kilometres southwest of Idlib and connects it to the Syrian coast. He noted that the battles for Ariha have been going on for over five months.

Alloush replied that the Islamic Front broke off from the Free Syrian Army because it believes that applying Islamic Sharia law is a duty for all Muslims, everywhere at all times. “After the regime falls, the Islamic Front will respect the people’s choice and will not impose itself by force. But if the people choose Islam, it will defend that decision,” he said.

Khaled agrees with defending the people’s choice. “It is for that reason that the Free Syrian Army exists,” he added.

Mahmoud Ismail, 33, a fighter with Souqour al-Sham, refuses to fight against ISIS because he believes that war between ISIS and other factions of the opposition is a battle over power, influence and oil. Ismail said that he informed his commanders that he will not engage in this war even if that leads to his dismissal. His only enemy, he maintains, is Bashar al-Assad.

Ismail points to the fighting between opposition factions and ISIS in oil-rich Jabal al-Sha’er in Syria’s desert east for control of oil wells after regime forces withdrew in summer 2013.

Nevertheless, Ismail concedes that ISIS has made mistakes.

“Every faction has its mistakes; everyone has both good and bad. They are our brothers in religion and they came to our aid. Fighting them is a sin,” he said.

Khaled responded that fighting ISIS is part of the armed uprising due to overwhelming popular anger at the group because of its gross violations and aggressions.

“Because of the limited support that the armed opposition receives, it was forced to look for avenues for funding. The best way to do that is through oil, particularly since that would deprive Assad and ISIS from it,” said Khaled.

Khaled and Alloush both defected from the Syrian army in the first months of the uprising. Despite their differences, they both agree that the goal that ought to unite all opposition factions is overthrowing the regime. They believe that their differences should be solved peacefully. They also both view the Nusra Front favourably and refuse to equate it with ISIS.