Despite the difficulty of his job and the heavy responsibility he carries, Mahmoud feels proud to help his family 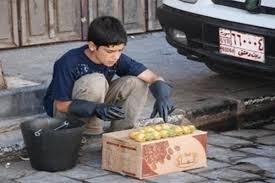 Mahmoud, at not yet 16, is the oldest of his four brothers and sisters. As the previous provider for his family has been incapacitated by the war, Mahmoud is now the sole earner. His family lives in Gaziantep, in Turkey, and Mahmoud works in a restaurant, for 14 hours each day, earning just $10 each shift.

But despite the difficulty of his job and the heavy responsibility he carries, Mahmoud feels proud to help his family.

Many such Syrian refugee children are forced to work long hours for these small sums of money. In addition to the dangers they often face in their work, they also miss out on going to school and getting the necessary education to help them secure a better future.

This phenomenon has reached dangerous levels, with UNICEF estimating that one in every 10 Syrian refugee children are working to support their family, in its report, “A Lost Generation.”

Many other organizations have said that the issue of child labor is one of the most complicated in terms of children’s protection, and that it is increasing.

Some reports reveal that many families depend on the income earned by their children, and that nearly half of school age refugee children are working either full time or part time. Many of them are working in short term jobs which vary from one day to the next. One activist working in childhood protection said that, “If you walk in the streets you will see Syrian children working everywhere.”

Because child labor is illegal, most employers attempt to hide it, for fear of legal consequences. Refugee families themselves also often hide the fact their children are working, out of fear humanitarian organizations will find out and then any aid they might be receiving be reduced.

More boys are in work than girls, according to studies done by humanitarian organizations. They often work in restaurants, shops, bakeries, sewing workshops, textile mills and barber shops.

Bassam, who is 15 years old, said of his job in a restaurant, “I go to work every day except Sunday, which I spend with my family. I have five brothers and sisters and our mother, but my father was arrested in Syria and we know nothing about him now. I earn 30 Turkish lira a day and I sleep in the restaurant, as I work from 7 a.m. until 11 p.m.”

At many intersections and traffic lights you can easily see many refugee children selling bottles of water and tissues. Hasan, who is 13, said that he does this work to “earn money and help my mother with the rent for the room we live in with my younger brothers and sisters.”

Girls tend to work in shops selling clothes or vegetables, or in beauty salons. Some also do agricultural work or housework.

Hiba, 13, is a refugee from Aleppo now living in Turkey with her family. She works in a grocery store which sells Syrian products. “I work to help my family,” Hiba said, “and to help provide for my younger brothers and sisters so that they can continue in school.”

Many children work for long hours in appalling conditions, with those working in construction or agriculture exposed to lots of dangers due to the heavy equipment involved, exposure to the sun, and insecticides. Those refugee children who sell to customers through their car windows at jammed intersections are at risk of being hit by cars. There were reports of one child burnt by hot oil, and another beaten by their employer more than once.

Child labor among refugees is directly related to the basic needs of the family, as these families have crossed borders to escape the horrors of war, often with only a few clothes to their name, and without important documentation.

Many have lost most or all of their savings, their properties and their source of income. Life suddenly becomes an unknown, and the future very uncertain. For many children, working to support their family seems like the only option, as otherwise the family would be unable to pay for rent or buy food.

Although many refugee families do receive some aid from charities and governmental organizations, it is limited and insufficient to cover all the basic needs of the family. Therefore they struggle to find any alternatives but to push their children into the labor market.

If not absent entirely, some fathers are incapable of working, for instance due to age, illness or injuries sustained in the war. Some are prevented from working due to legal or social reasons, and with mothers occupied with looking after the younger children, it so falls on the elder children to seek work to support the family.

Some parents and children describe it as easier for the younger generation to find work. One mother explained that her son was working and her husband wasn’t because, “the child can accept the mistreatment and the insults, but his father cannot.”

Abu Muhammad, from Saraqib in Idlib and the father of five children, said he feels ashamed because he could not find any stable work, while his 14-year-old son works in a restaurant from 8 a.m. until 9 p.m.

“All of our savings have been used up, and living here is very expensive,” he said, but he is thankful that he was able to bring his son’s school certificates with him from Syria when they were leaving, evidence of his son’s previous achievements, now that he is out of school and working.

In situations where the father is absent, due to being killed, wounded or arrested in the war, the mother handles the responsibility for supporting the family. Often this means they need to rely on their children to help them bring money in.

But some children carry the burden graciously.

”My younger brother goes to school and I work in a restaurant to get some money and help my mother in providing what we need,” 14-year-old Saleem said proudly.

But the refugee children who have to work to help support their families shoulder a heavy weight. And soon the usual fears of childhood are replaced with adult worries, as they are forced to grow up much faster than other children.