The latest campaign by the Syrian regime has been particularly destructive 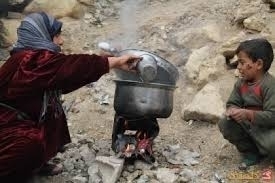 Standing in front of the bodies of six of his family members, Abu Saleh, husband, father and grandfather, spoke at the mass funeral. His wife, daughters and grandchildren were killed when several mortar shells hit their house while they were eating breakfast together. His wife Afaf Almodawar, his three daughters Fatima, Wehba and Rama Seryol, and Fatima’s unborn baby and 2-year-old daughter Tala Al-Bouidani were all killed.

And they were by no means the only family torn apart in the Eastern Ghouta on that day in early April. Other houses were bombed, in Mliha, Mesraba, Sakba, Harasta and al-Turkman Htaitiya. At least 29 martyrs were killed on Sunday April the 6th, in the seemingly neverending march of death.

The head of the Douma family which was obliterated that day shows remarkable faith and patience, speaking about how they had all been waiting for the siege to be lifted, and for victory over the criminal regime, however difficult it might be to achieve. His family, he says, didn’t flee in the early days, before the regime’s army closed all of the entrances to the city. They resisted, awaiting salvation while having to endure the siege, hunger, the daily bombings and death, along with over a million other citizens in the rest of the Eastern Ghouta area, which has been under Assad’s siege for over a year now.

This most recent military assault on Eastern Ghouta started on April 2, and lasted for seven days. According to medical sources, 190 martyrs fell, and at least 600 civilians were wounded in Mliha alone, along with 1,700 elsewhere. Doctors on the scene said that many of the wounded sustained permanent injuries, such as the loss of limbs, and eye injuries, due to shrapnel from bombs.

War planes carried out 86 air raids on Mliha alone, which was the focus of the campaign, targeting it with 20 surface to surface missiles, a high number of mortal shells and cluster bombs, the use of which is banned worldwide. Grad missiles and even toxic gases were also used.

Mliha was especially targeted as it is at the entrance to the Ghouta, and had already witnessed violent clashes over the last few months. The battles pitted FSA factions, most notably the Al Rahman brigade, the Islamic Union le Agnad al-Ard, the Nusra Front and the Islamic Front, against the regime, supported by Lebanese Hezbollah members and Iraqi militias, including the Assad Allah Algalep group, fighting for the regime for the first time, according to Mohannad Issa, a spokesperson for the Douma Martyrs Brigade.

The first axis was the air defense department, then the headquarters of the signal regiment 81 and then a roadblock adjacent to the Tameco factory, where the battle started when, as the spokesperson described, the regime launched a pre-emptive strike in an attempt to prevent the FSA launching any attacks towards Damascus.

Many people living under the siege started to call for opposition military factions to go to the capital and overthrow the regime, simultaneously lifting the siege on the Damascus suburbs, which has created hundreds of martyrs, due to starvation, illness and bombing.

On the recent campaign, an FSA spokesperson says that the regime lost an armoured vehicle, three tanks, and that over 250 shabiha and soldiers were killed, including Colonel Ali Haidar, the leader of the military campaign against Mliha. A further 20 were captured, including leading members in Hezbollah. Around 20 shells hit buildings held by the regime.

While regime media says that clashes are ongoing around the air defense department and Jaramana, towards the Al-Nasim barrier, and that government forces have reached the Khaled Ibn Alwaled square, the Mliha municipality building and dispensary, they have actually not reached this far. Fighting is continuous around the area, and entrance to the municipality is considered suicidal as it is heavily mined.

Abdullah Al-Shami, media office manager of the Islamic Union Le Agnad Al Ard, confirms that the regime has not reached this far, and that it is instead attempting to exhaust the opposition military factions by opening several fronts at once, and preventing them from being able to consider marching towards Damascus.

Shami says that there is a joint operation room, named Ashab Al-Yameen, where the various opposition battalions coordinate, and that all factions in the Eastern Ghouta are working together to repel the regime forces and simultaneously protect the civilians living under siege.

The effects of the campaign on areas under regime control have become very clear. Schools were recently suspended in Jaramana, which is the closest to Mliha, as it was considered as a military zone by the authorities. There is a mixed population living in Jaramana, including a high number of regime military families, due to the bad security conditions on the borders of that region.

The regime is attempting to crush the entire Eastern Ghouta, as its people refused to surrender, despite local truces elsewhere. Despite the lack of a military threat inside, the regime is targeting the region with rocket fire, aerial raids, and barrel bombs, areas overcrowded with civilians, already exhausted by the siege, and people who pose no military threat.