Adults launch the war, and the young fall victim to it 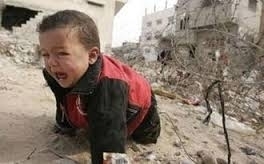 The ongoing conflict in Syria means that people are exposed daily to all kinds of destruction to their lives and propertiy. The war affects all aspects of social and economic life and leads to catastrophic psychological and emotional impact, especially on children who see the destruction of property, physical injury, arrests, torture and the death of their relatives.

The violations that children witness in their everyday life affect deeply their human psyche and negatively impacts them for years to come.

Children make up half the number of the Syrian refugees in Turkey and their minds retain the scenes and sounds for which they can’t find any explanation. These images and sounds will resonate for years to come and be kept forever, to reappear from time to time in their dreams and some behavioral reactions.

The most notable and immediate impact of the shock of the war in children manifests in behavioral disorders that appear in many forms. Severe anxiety, fear, insecurity, persistent tension and isolation as well as bedwetting are some of the symptoms. Children express their feelings in many ways including aggression, dealing harshly with his friends, and speedy and emotional arousal. For example, the child may cry without any reason or gets angry for no apprent reason.

The head of Child Care Center in Kilis in Turkey said that "all the games these kids play are violent and have something to do with weapons or things relevant to the events in Syria.”

Some parents spoke about negative tendencies in their  children’s behavior as a result of the crisis.

“Instead of watching children's programs, my kids watch the news on TV, and they seem afraid especially at night when they go to sleep or when they hear a loud voice or the voice of a plane,” one mother of six explained.

In an interview with an activist and psychologist in the refugee camps revealed the impact of war on children.

“In war, the psyche of the child is affected because he is too young to understand what is exactly happening and his concepts don’t include yet the meaning of sacrifice for home of religion. So children under nine years old can’t understand these concepts. Add to that, child has no means to express his fear, anxiety and horror except crying,” she said.

The specialist psychologist says that children suffer panic and night fears. They lose some of the skills they have acquired before the crisis, they suffer behavioral and verbal disorders, and their behavior becomes violent and they lack any desire to play.

Cooley Oglu, the director of the Center for Training and Education for the Syrian Children in the camp of Urfa says that the war has a deep impact on the psyche of children that some of them suffer stuttering and stammering because of the fear they feel.”

Zeina, a field activist says that “children paint aircrafts, missiles and tanks. There is a girl here who doesn’t stop speaking about the rocket that has hit her father and she keeps describing how she has saw him dying. This is an example about the grim reality in Syria."

”One of the most dangerous effects of war, as confirmed by the psychologists, are the psychological problems and complexes the children of a whole generation suffer later in the form of chronic phobias of persons or things that were accompanied with the events they witnessed, such as soldiers, sirens and planes."

It is difficult to determine the degree of the effect on children because it depends on parents understanding and how to help children to overcome the events they passed.

Psychologist Neamah Badrawi says the shock on children caused by human actions are more severe than those he might be exposed to by natural disaster "because the strike roots in his memory and it becomes more difficult to save them because they are repeated frequently and accumulated."

"It is difficult to detect such cases because children haven’t the suitable means to easily express how do they feel or to describe their mental state. This leads to deep psychological problems, especially when the parents or the environment are unable to understand these cases and help the child to overcome them.”

Zeina said that in such painful circumstances "it is necessary to intervene to protect them and prevent the aggravation of these mental and emotional problems they experience in order not to be affected in future. That’s why parents and psychologists should do their best to support children as much as possible."

Care centers and schools are collaborating with some interested institutions to deal with these cases through a work plan to adress the problem.

They start by trying to calm the children down and return a sense of security, as it is one of the most important physcological human needs. They try to discharge the pent up feelings that the children have acquired in war through free play, drawing and performance roles, as such activities have very important role in discharging these negative emotions.

In addition, it is important to get the children out of the war circle that they lived in before by providing a suitable atmosphere that satisfies their inclinations and interests. They have to practice fruitful and amusing activities and to engage in the educational process that stimulates them to be interested in their homework.

It is very important to monitor the programs that the children watch on TV to prevent them from watching scenes of bombing, killing or any sad scenes that remind them of the shocking circumstances they have endured, and focus instead on entertainment programs that take them away from the shock stage and help them returning to normal everyday life. It is necessary to take the initiative towards children to make “conversation” through games and graphics that encourage them to express themselves. Sometimes, a hug has more expressive impact than a long conversation.

There are more than 25 articles in the Geneva Convention and their two additional protocols refer particularly to children.