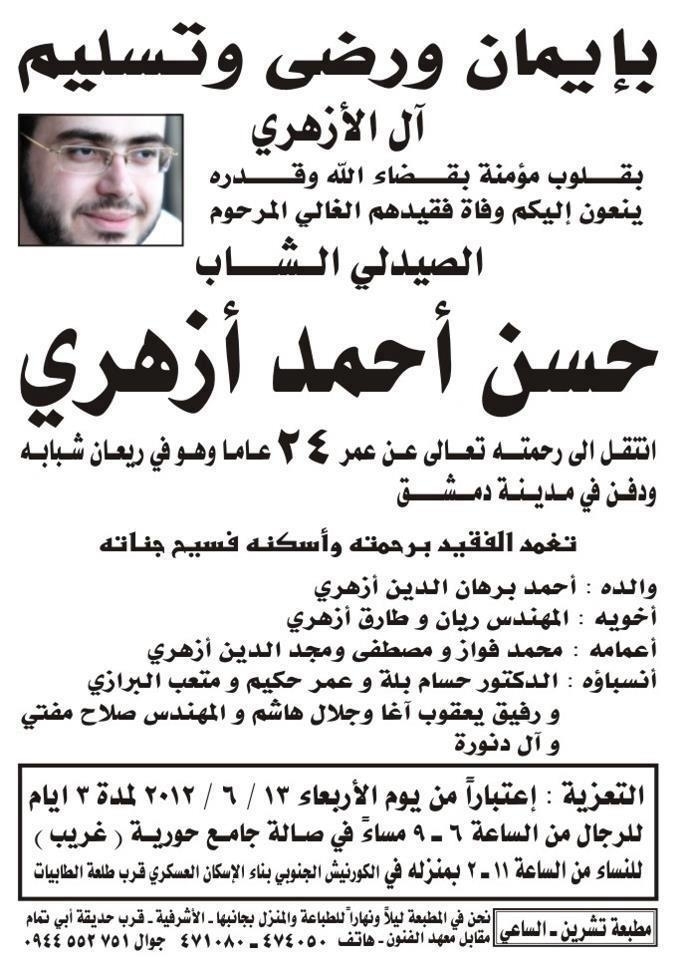 After three years of war, the way death is dealt with in Syria has changed as much as all aspects of life have there. Losing a family member at the hands of the regime forces while living in the areas they control is a heavier burden than it sounds to be. For the family, how to bury the victim and hold the funeral are bigger concerns than grief itself. In the obituary, anything else than “a painful accident” is suicidal to be said explaining the cause of death.

Some families, however, would use terms reflecting submission to “Allah’s will,” giving implicit hints about the cause of death and grudge towards the killer:

“With absolute belief and submission to Allah’s will, the family of …. announces the passing away of their beloved, young son, doctor Hassan Ahmad, who passed away at the age of 24 while still in the prime of life and was buried in Damascus..etc.”

The family in such cases would make sure to underline words like “doctor” and “young” just to give implicit reminders of their painful loss and the criminal deeds of the regime.

In the meantime, shabbeeha and members of the regime forces killed in battle are announced with such terms as “the valiant leader,” or “the heroic martyr.” The obituaries in this case are fancy posters with colored pictures of the victims in uniform and arms; pictures those fighters had taken for this particular purpose probably.

In the anti-Assad, liberated areas, people can use the wording they want. Towards the end of 2011, there was a feeling that the situation in Syria would be solved soon. In areas such as Al-Midan, Douma, Daraya, Al-Hajar al-Aswad, Mezzeh Sheikh Saad..etc, obituaries of many victims of the regime explicitly expressed the cause of death: “And never think of those who have been killed in the cause of Allah as dead. Rather, they are alive with their Lord, receiving provision.”

The people of Al-Midan proudly announce the passing away of their beloved martyr, the child … who was shot dead by the security forces and shabbeeha in al-Qadam area following the Friday prayer.

The people of Daraya proudly announce the passing away of the martyrs of freedom who were murdered at the perfidious hands of betrayal in the city.

The people of free Zamalka announce the passing away of their free martyrs who responded to the call of their god.

The family of … announce the passing away of their heroic martyr … who was murdered at the hands of betrayal (the military intelligence and their aids).

It is interesting in the liberated areas how bold people are in expressing the cause of death, and how funerals turn into congratulatory ceremonies for the martyrdom of the “hero.”

In pro-Assad areas, causes of death are not to be hidden too:

“The National Defense Forces in Homs and its Suburbs proudly announce the passing away of their heroic martyrs who sacrificed their pure souls for the soil of their homeland and the pride of Assad’s Syria.”

It means that they die for the sake of the Assad family, and that the homeland is linked to Bashar al-Assad and his family. Had someone else ruled the country, Syria is no longer the precious homeland that’s worth sacrifice.

The majority of these obituaries end with the words “public invitation,” since death has become a public affair that concerns all Syrians. It is interesting how bullets, torture, and shelling have become the regular causes of death in Syria, while normal death has become an exception. Even this exception is now a burden the family of the deceased can barely handle.

Few weeks ago, a Syrian young man in his 30s died of illness in London. However, the British government denied his family a visa to take his body back to Syria. The body stayed in a mortuary for more than a week before it was buried by strangers. His family never had the chance to say goodbye.

Also, Elham Abdul-Latif, wife of the Syrian late author Mamdouh Edwan and the owner of Mamdouh Edwan Publishing House, passed away recently, and Ziad and Marwan Edwan could not accompany her body due to security reasons. Her body went back alone, to be received by her family who had disagreed with her political views over three years preceding her death.

Many others have already reserved their graves next to those of their beloved ones, and are now afraid to die alone away from them. They are not afraid of death itself, but from settling for ever in a land that does not mean much for them, a strange land they are not used to its smell. They are afraid to be buried next to strangers who spoke different language and had different memories. Syrians are very lonely today, both in life and death. They are too lonely to where their death has become a very public invitation.