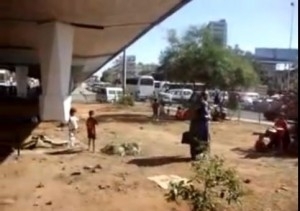 Samir is responsible for student enrolment at a school for Syrian refugees in a Beirut suburb. The school, which is run by a Lebanese civil society organisation, only opened recently.

The school is located in Shatila, the Palestinian refugee camp in Lebanon where a large number of Syrians have found shelter.

After checking the names and birth dates of four refugee children, Samir told their mother Khadija that all of them – Kamal, Leila, Mahmoud and Saeed – were eligible for registration.

Khadija, however, said she could not afford to have her oldest son, 14-year-old Saeed, enrolled.

“You know the situation – Saeed works to help us,” she said.

Nearly 200 Syrian children are enrolled at the Shatila school, but many others are not.

“I don’t have an exact tally for pupils whose parents have kept out of school to work, but I know there are dozens of them,” said Samir.

Samir is not his real name – he asked that neither he and his organisation be named in keeping with a policy of not making media statements.

On April 3, the United Nations refugee agency UNCR said the number of Syrian refugees in Lebanon had passed the one-million mark. Of that number, 400,000 are children of school age, three quarters of whom are not in education.

When Saeed wakes up with his siblings every morning, they get ready for school while he carries a large bundle of bags of paper tissues that he sells in the streets just outside the refugee camp. Sometimes he is accompanied by his neighbour Mohammad, who is the same age as him and does the same thing for a living.

“Of course I prefer going to school… the school here is nicer than ours in Syria and my siblings are learning good things. But how would we live and eat if I didn’t support my father through this work?” Saeed said.

While Saeed’s father was too embarrassed to be interviewed, his mother Khadija described the family’s living conditions.

“We pay 350 US dollars [monthly] to rent this place, which is definitely more than my husband can earn by working in construction,” Khadija said. “Add to that the electricity and water bills, food and other expenditures, all of which are covered by Saeed’s work.”

Khadija said the family was also receiving some food aid from relief organisations.

“None of this would have happened if we hadn’t been forced to flee and become refugees in a foreign land,” she said.

Many other minors are in the same position as Saaed. Hassan, 14, similarly provides for his family, who fled from Daraa.

Hassan’s father Jamil refuses to let him work as a street vendor, and got him a job in a household appliances store inside the camp where he gets paid 50,000 Lebanese liras (about 33 dollars) every two weeks, in addition to tips from customers.

“In Syria I used to worry about him a lot. How can I let him work in the streets and be exposed to various dangers?” Jamil said. “I have some peace of mind knowing where my son is, and knowing he is safe.… It is true that he should be in school, but the life we are living is very difficult and he’ll have to get used to it sooner or later.”

The Lebanese government does not maintain a presence in the refugee camps, and is in any case lax about preventing child labour. Nevertheless, the working children living in Shatila make sure they do not stray too far in order to avoid the police.

“I sell paper tissues at crossroads and traffic lights, and it’s very rare for us to be caught by the police,” said 12-year-old Omar. “Whenever we hear children are being arrested, we quickly return to the camp.”

Once a policeman got hold of Omar and put him in his patrol car. The police joked with him, took a box of tissues and asked him about his village back in Syria. In the end, a policeman slapped him on the neck and let him go, saying, “Don’t do any anything bad.”

Ever since, Omar has moved away whenever he sees a police car approaching.

Working Syrian children interviewed for this report said some local residents found them annoying, while others were sympathetic and gave them clothes or shoes.

None of them is receiving help from social workers. A volunteer child psychologist in Shatila, who declined to give her name, said that in some cases, children were arrested by the police and sent to a boarding school until their parents pledged to stop them working.

“A woman once came to us in tears, saying that she was unable to get her son back. We called the people in charge [of the boarding school] and managed to return the child to his family after they promised to enrol him in school and stop him working,” the psychologist said.

Child labour denies the basic right of access to education. This problem is unlikely to be solved in the near future, especially since child labour in Lebanon did not start with the influx of Syrian refugees.

Samir, the school official, sometimes tries to pressure parents into enrolling their children in school instead of sending them out to work.

He recalled that one mother reacted by telling him, ”In Syria we were being bombed and killed, and here we go to sleep with empty stomachs. How do you expect me to register my child in school? Do you think I am happy to be denying him an education?”