I was never concerned with their sects, just as I did not care about the side they were fighting on 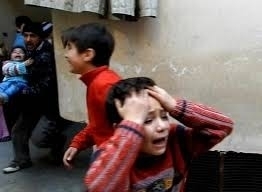 My name is Laurie, I am 35 years old and I will carry you with me to live part of my days, which have been repeated for four years, and are still repeating [today].

Before the year 2011, I had considered myself one of the happiest human beings, especially because I was listening to the first cry of the most beautiful thing man can make.  By virtue of my specialty— I graduated from the Institute of Midwifery in Tartous— I became responsible for a birthing ward in one of the government hospitals, National Hospital. For fourteen years no day passed without [my] caring for a new angel, touching and kissing him even before his mother’s hands.

Because of the intensity of love for my career, I had an additional job overwork in a private hospital in the same field; and so did my days continued. And with every birth, I felt like I was born again, and felt a color change every day. Once I'm maize, then brown, and then blonde,  another I am Arabic, Kurdish, Armenian and Turkmen, other times I'm an Alawite, a Sunni, a Christian. All these qualities I gained from the births that I carried out every day, but my happiness did not last.

War broke out in my homeland and changed my career because of the [new] need, from the brightness of giving birth, for the dull housing of daily death. I became responsible for the relief of wounded soldiers. Naturally, the births in our region diminished. I was receiving new life every day before the year 2011, and letting a life go every day after 2011.

The wounded come with various injuries. Soldiers in the prime of their life, none of them past their twenties, and from all the Syrian governorates. I was not interested in their sects, and did not ask any of them why they were fighting. Mostly they felt lost, and on their faces were signs of fear, pain, and despair. I was so close to what they experienced, and participated along with them in their pain, moaning, and memories of their dreams.

I treated them as I treated the newborns. I took off their clothes, even their underwear, which was tattered. Most of them had not gone on a vacation for months or years. I participated in several associations and collected donations to buy new underwear for them. I heard a lot of ironic statements from my friends, including charges that I was crazy or unethical, but I did not care because I see in these young soldiers my children whom I helped birth. They were crying and I was lulling them.

One of them was waiting for my shift in order to show me the picture of his virgin child, whom he had not seen, and did not know, but only knew from a picture sent to him via a cell phone. I excelled in pointing out the similarities of the child with his father, and I lied sometimes when I saw the happiness on the miserable soldier’s face. The next day I came back to see his bed empty, and [learned] that the father did not survive. There was nothing left of him but the pictures, so I know that the young man had died, and another soldier had come to occupy his place, walking the same path.

I learned from them what they loved, and I surprised them on the second day when I brought it to them. They kissed my hand and I was embarrassed at first, but later I felt that it gives them some relief, so I stopped withdrawing it. For the lovers among them, I read poems by Nizar Qabbani. I never talked with them about home, duty, or sects because I felt that these conversations insult their pain. I was often paying for their their phone cards so they could continue to communicate with their parents; I will never forget that Dairi boy, Diralzor, whose greatest fear was that his fiancée had left him because he could not communicate with her for almost a year. They were also crying for each other, most of them had come to the hospital with the loss of a friend in battle, whom they considered much closer than a brother. I did not dare to cry in front of them for fear of increasing their sorrows, because they were waiting for hope from me. So when I go back home I cry for a long time.

One day, someone asked me if I was married. I smiled to him and said no, and I asked him why he had asked. He replied shyly that he decided if destiny gave him life, he would bring his family and ask to marry me. I patted his head and told him that if I had gotten married early, I would have had children of his age.

I often took my colleagues’ shifts in order to spend as long a time as possible with them, because every time I took my break, I came back to find that someone had left this life, and I was sad because I did not hold his hand in his last moments. And so on, with each death a life was dying inside me, and if I was bleeding away the lives that I had gained at [the] birth[ing ward], there was one big difference: the pain of death is greater than the joy of childbirth, that's what I felt.

I was never concerned with their sects, just as I did not care about the side they were fighting on. No day passes without me waking up from my sleep, terrified by one of them roaming in my imagination.

It's a dirty war that kills me dozens of times. I thought many times of suicide in order to be saved from pain. But I was always retreat for the sake of the coming people, war is ongoing and our death is continuing.