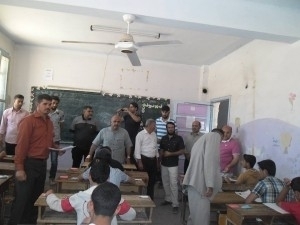 For the second year running, many students from the Jabal al-Zawiya district were too scared to travel the 25 kilometres to the government-controlled provincial capital to take their official exams.

“I never thought I could go to Idlib city to take my final exams. What if they arrest me?” said a ninth-grade student from the town of Kansafra, who gave her name as Nada.

Instead, Nada sat her exams in June in Kansafra, one of 34 towns in the Jabal al-Zawiya area, home to around 100,000 residents and under the armed opposition’s control for the last year-and-a-half.

But middle-school and baccalaureate students said they were frustrated by the lack of organisation and the stressful atmosphere in which the tests took place.

For their part, local pro-opposition officials complain of a lack of support from the education ministry of the interim government, appointed by the Syrian National Coalition (SNC).

Mohammad Jamal al-Shohood, the head of the local directorate of education, affiliated with the opposition’s education ministry, said that most exam questions had been based on the Syrian curriculum.

The same set of questions were given both inside and outside Syria, although some schools set exams based on the Libyan curriculum. Those students’ certificates will be accredited by the Libyan government, he added.

According to the Facebook page of the ministry of education, Minister Muhieddine Banana received “specialists from Europe” who visited examination centres in Syria and neighbouring states, and confirmed that the exams were conducted according to international standards.

But al-Shohood noted that the education ministry, based in Gaziantep, Turkey, had not offered his office any financial support to run the ninth grade examinations.

“We volunteered to organise the examinations,” he added.

Mohammad al-Hallaq, the head of the Educational Assembly, a branch of the education directorate, also criticised the opposition’s ministry of education.

“If officials are unable to provide the necessary resources, then they should resign and give an explanation,” he said.

Damascus Bureau contacted the ministry through its official Facebook page about these concerns, but despite being promised a response, received no further information.

Students said the exams had been badly-run and nerve-wracking.

“One of the supervisors screamed hysterically at a student in the exam hall and threw his backpack out,” said Nada, the ninth-grade student from Kansafra.

Another local student from the same grade, who asked to remain anonymous, said that the atmosphere was too stressful, adding that he had found the tests difficult.

Al-Shohood explained that such incidents were a result of the pressure the supervisors were under, given the “lack of security in the liberated areas”.

He added that his office had coordinated with the sharia court and local military factions to help organise the examinations, but warned that “some students whose fathers fight with the opposition try to use their connections to get away with cheating”. He added that disciplinary measures would be taken against any supervisors who acted negligently.

Overall, Al-Hallaq expressed his satisfaction with the procedures, which he said were up to “international standards”.

“Of course, there were some errors in light of the security situation,” he said.

Another concern for the students is whether the diplomas issued by opposition authorities will be recognised. Nada said that she doesn’t know whether she will be admitted into the first year of high school, especially since the only one in the area is run by the Syrian government.

“The students that took their exams under the SNC’s system cannot go to regime schools,” said Nada.

Al-Shohood said that his office lacks sufficient funds to open any high schools, and Mohammad (not his real name), the principle of a government school in Kansafra, said he could not enroll students who hold certificates issued by the opposition.

“We fear that the school would be shut down by the regime and the employees fired,” he said.

The opposition-lead ministry of education said in a statement on its Facebook page that Turkey will recognise high school diplomas issued by the interim government and that other states will also approve them in the future.

“This will benefit thousands of Syrian students to whom the door will be wide open to study at Turkish universities,” the statement said.

Ahmad Tarraf, a member of the Syrian Youth Association, a volunteer organisation providing educational support for local students, said that military factions such as the Martyrs of Syria Brigades and the Islamic Front supported various schools.

Murhaf Najjar, a Syrian Youth Association member and the principle of the Revolution School in Kansafra, explained that their organisation was struggling with scarce funding and a lack of materials, although that the opposition education ministry is supposed to provide textbooks.

Al-Shohood refuted this claim, saying, “I notified them that they can get the books from the Educational Assembly of the Jabal al-Zawiya region. I do not know if they received them yet or not.”

Another issue at stake is the recognition of teacher training institutes.

In 2013, the directorate of education established three such centres in Idlib province, but it remains unclear whether the diplomas they issue will be recognised by even the SNC’s ministry of education.

A statement published on the ministry’s official Facebook page warned that “the institutes of teachers’ formation in the province of Idlib are operating without the ministry’s approval”.

Al-Shohood agreed that the ministry had not been part of the formation of the institutes, while noting that “we gave it the opportunity to provide us with financial and material aid”.

There were American and Saudi universities willing to accredit the degrees granted by the new training centres, he added.

“This way, it would be as if our students had studied at American or Saudi universities.”

But even as they find their own solution to the gaps in education provision, local officials say that the interim government must get more involved.

“The policies of the [interim] government and the ministry of education are all helpful to the regime,” said al-Hallaq. “Not offering support to teachers who are fired only means that teachers will stick more closely to the regime.”