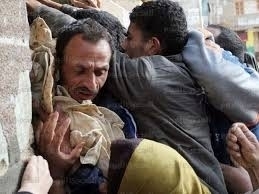 My name is Mustafa al-Farran, I am 45 years old, a baker from Latakia. I inherited the profession of making bread from my father—a craft we have mastered since the days of our ancestors, so much so, that it became associated with our name, and we became the al-Farran (baker) family. Before 2011, I considered myself lucky because of the profession I inherited. The people of my neighborhood showed me great respect because I produced good bread for them, and I felt proud when I heard someone say, “we put the bread in the fridge for a week and it stays fresh.”

Every day I awoke at four o’clock in the morning and woke up my eldest son, age 17, to accompany me to my bakery, which is a quarter hour walk from my home. We would begin to prepare quantities of flour—almost the same quantity every day, except for the summer, when it increases slightly due to the influx of tourists. We would make the dough and leave it to ferment, and then we were ready at six in the morning to distribute the bread.

The situation remained the same until the outbreak of the events in Syria in 2011. In the beginning, the pressure on us was almost exclusively on Fridays, since one of the largest government bakeries is in the neighborhood of as-Saliba—where the Friday demonstrations caused many people to prefer not to go there. This created pressure on us from people who were not our regular customers. The situation changed rapidly after the seventh month of that year, when the ar-Raml al-Janoubi neighborhood in the province of Latakia was stormed, and hundreds of families fleeing from the clashes poured into the city center and dispersed among the city’s mixed sectarian neighborhoods, which resulted in longer working hours [for us].

The relationship between the people and us became more complicated as everyone became nervous, and everyone was prepared to fight a battle with anyone at any moment. Friendliness was absent in dealings with others, and the privacy of the customers we knew was lost. When people came to the bakery, they didn’t think at all about others, and those who used to buy two kilograms asked for much more. They were anxious about not to being able to secure their bread for the next day, and that their children might starve, so they saved bread even though it would rot after a while, but the quantity that we could bake each day was limited. The government tried to increase our shares of flour, but this didn’t overcome the people’s rising anxiety—some of them had 10 kilos of bread at their homes, while in the middle of the night someone might come and knock on their door asking for 1 kilo because he could not get bread that day.

I would go back to my home only to scream at my children all the time, my temper was always flaring up. We were waiting for the [fulfillment of] the government’s promises that the situation would soon go back to normal. But the truth was just the opposite— in 2012, the battles spread to most of Syria, and the number of arrivals to Latakia reached hundreds of thousands, and all our problems doubled. The power outages became continuous, so we started to depend on generators. The fuel was cut, so we entered into a war to secure fuel. We went to the bakery feeling like we were going to a battlefield. We would enter from the back door of the bakery and lock the door because all the people were rampaging and they might have broken into the bakery at any moment.

I have seen dozens of battles with hands and knives in front of my bakery; a lot of blood has been shed. Everyone hates everyone, as if they were not from the same country. Insults were the primary language used, and they were always insulting me, thinking that I sold flour in secret in order to become richer and increase the crisis—and this was propagated by the media, but it was not true. I hated the official media because it did not even once mention the [people] who come every day and told me, over [the crowded] shoulders of people, the amount that they wanted—which was always much more than what people took. They came showing their weapons, so I understood that they were security men. They looked on with disgust at the multitudes competing [for bread], and I felt compelled to give them what they wanted, because it was so easy for them to go to my home or drag me from my bakery in front of everyone on charges of obstructing the security men from chasing the terrorists. I swallowed my tears, feeling that I had no dignity, especially since people made me feel at that moment as if I was responsible for repelling these terrifying men, and I often wished this crowd would attack them and eat them. But they did not do that because they were terrified like me, and they were looking to unleash their anger upon the weakest.

I asked the security men to come at a specific time, but they did not respond to me. In fact, I was trying to save myself from receiving insults in front of people. In most cases I was asking myself, why doesn’t the government allocate specific bakeries for themselves in order to lift the burden from the people’s shoulders and soften the people’s anger? But I came up with no answer. Can any of you imagine having to go to work by taxi each day, while work is [only] a quarter of an hour walk? Yes, this is what I do, I do not dare to go to my bakery after midnight on foot—the city is filled with hungry and displaced people who are willing to commit a crime for a few coins. This compels me to wait for the taxi of someone I know to take me to my bakery. I have thought a lot about giving up my career, but the ghost of hunger prevented me, as there is no work in this city and the sidewalks and parks are filled with the unemployed.

I will tell you what I feel now: I hate the displaced people because they occupy the city and we have become strangers in it. I know that it is not their fault, but we can bear it no longer. My city has become like a volcano that may explode at any moment, and there will be rivers of blood in the streets, because life has become unbearable and everyone realizes that the moment of this volcano’s eruption is soon—especially if the pressure keeps rising and it seems that the solution is missing, and [if it seems] that if people kill each other, their numbers will decrease and solutions will appear. How ugly it is when your hope in life relies on the death of another, but this is our reality.