The regime is extending military service as the army becomes stretched 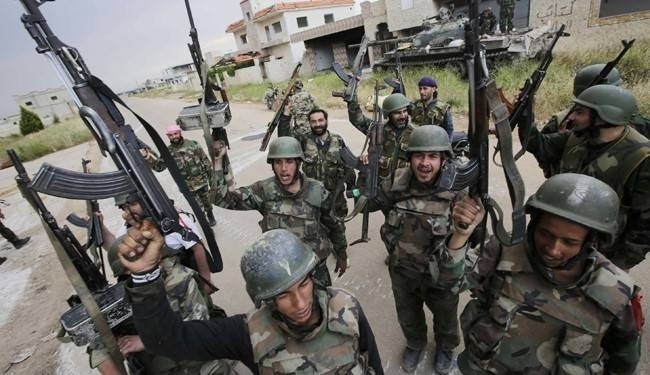 "Don’t raise your weapon against  your brothers in the Free Syrian Army," Umm Muhammad instructed her younger son, after he was forced to stay in the Syrian army, two years after completing his military service.

Although Umm Muhammad is worried about her son with the rebel artillery falling on the military base where he serves, her greater anxiety is that he might raise his weapon against his brothers. Umm Muhammad couldn’t convince her son to defect or escape because he was afraid of the regime's policy of reprisals towards the families of defected soldiers.

Muhammad's situation is like many soldiers in the regime army. Many of them are deprived of mobilization, which leaves them with two hard choices; either to fight their brothers in the Free Syrian Army or bear the punishment applied on their families if they defect.

Khaled, a former soldier in regime's army, was kept in the army one and a half year after he finished his service. He described the difficulties he went through when he tried to defect.

"After finishing my military service in the army at the beginning of Syrian revolution, I wasn’t allowed to move, which led me to trying to defect. But I was caught with a group of my colleagues, and they put me for three months in a solitary cell."

Khaled endured a terrifying experience when he heard that the officers had started to execute the soldiers who tried to defect.

"Afterwards they raised the level of security on all soldiers," he said, "they were constantly threatening to arrest our families if we tried to escape".

Despite this, Khaled considers himself luckier than his colleagues, because he was injured and he went through several surgeries, before finally being released and returning to his family after a long military service.

Abdulkader, from Damascus, wasn’t so lucky. The regime refused to allow him to move despite the fact he was injured and underwent several surgeries.

"He was moved to office work," his father said. "We couldn’t do anything to mobilize him or secure his defection." Abdulakader's father confirmed that some officers invest these situations to blackmail the family, asking for a huge amount of money in order to move the soldier, but of course they took the money while the soldier remained in the army.

"Even if my son tried to join the Free Syrian Army, it is almost impossible now because reaching rebels-held areas in the countryside of Damascus is impossible because of the military ID my son carries. Furthermore, we have no place to go to if the security forces harassed us," he said.

Fear pushes some soldiers from families supporting the revolution to participate in the battles against the Free Syrian Army. In an exlusive interview, a military source in the armed opposition said that "the penalty of any one who fights against the Free Army is death, regardless of his sect or city".

Three years after the revolution, there is no place for half-ways. The courts should investigate before judging the captives, the surrenders and even the defectors whose actions before defection should be considered.

In a related context, the Syrian Observatory for Human Rights confirmed that the regime keeps the soldiers in service because of a current lack of the recruited soldiers.

The current number of soldiers is estimated 70,000, while the number reached 320,000 soldiers at the beginning of the Syrian revolution. The regime tries to compensate by depending on the Lebanese, Iraqi and Iranian militias to fight beside him.

The statistics of the Observatory showed that the regime has arrested 5,430 citizens and forced them to fight among his troops from the beginning of this year to last month, which means that each week, 168 citizens are arrested in the pro-regime areas or regime-held areas.