350,000 students go back to school in opposition-held areas of Syria 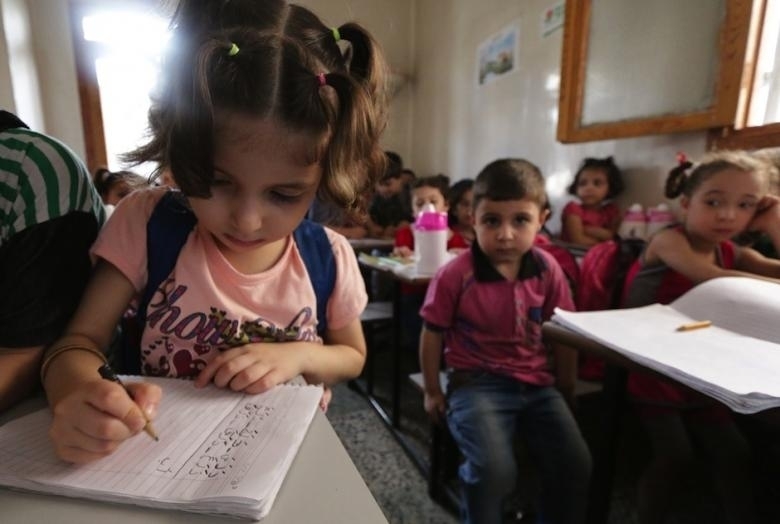 The new school year started in Syria with 350,000 students. It is a record number despite the hardships of displacement, declining living standards and daily casualties.

The tainted measles vaccine sent by the opposition Syrian Coalition government to Syrian children in the “liberated” areas are an example of the severe crisis that Syria’s children are facing. The new school year started with its problems for weary parents and unsuspecting children oblivious to the gloomy future awaiting them.

Back-to-school expenses exceed 20,000 Syrian Pounds ($110) and represent a real problem for the poor. These expenses include everything the student needs from stationery supplies to school uniforms and new clothes. The Education Ministry distributed a million school bags in collaboration with the United Nations Children’s Fund (UNICEF). It also distributed 80 million textbooks to students in elementary and middle schools for free and to students in high school at half price. Despite the ministry’s continued effort, the difficulties of teaching and adapting to school is a whole other story.

The number of students who registered in the first three days of school reached 350,000 according to the ministry’s figures. The number is expected to reach 500,000 by next week, which is a record number in light of the challenges posed by the ongoing war.

Going into a school is like entering a military base; this is an old complaint about government-run schools in Syria that was heard even before the war. Their dark buildings and windows fitted with metal bars feel more like a prison. Poor cement playgrounds lack even the most basic pieces of equipment. The depressing classrooms cannot accommodate the number of incoming students and oxygen inside these rooms is lacking considering the number of children. Not to mention the teachers’ complaints about their inability to maintain order in the classroom and to give their students the attention they deserve.

The Education Ministry set up courses for absentee students and dropouts for two months. These courses ended with a test to determine if the students passed or failed before the start of the new school year. The ministry did not ask students to present identification papers to determine the class they belong to. It did not require an official school uniform either. But the decision of the ministry to require additional classes for students who are one year behind in their studies added to the teachers’ responsibilities.

Fadila, a teacher in a middle school in Lattakia, said that education has suffered a great deal as classrooms that are supposed to fit 40 students – which is already a high number – have more than 50 students in light of the displacement and the influx of people coming from other provinces to the city. Schools are also complaining about parents’ lack of interest in their children’s academic progress in light of the increase in the number of orphaned children, the decline in the standard of living and the fact that many newcomers to the city lost their houses in the areas where they come from. The parents’ attitudes, according to Fadila, reflect on their children’s ability to achieve academically.

The first day at school was hard on Ziad, a first-grade student in one of the country’s public schools. His mom said she went with him to school “to be with my son on the most momentous day of his childhood.” Ziad clung to her dress and started crying and asking for his father.

It was impossible, however, to fulfill his wish on this special day. His father’s body had not arrived yet from Tabaqa military airport in Raqqa which fell under the Islamic State’s control more than a month ago. Sanaa, an educational counselor, said the children of martyrs seem visibly withdrawn but the teachers are unable to deal with this problem.

The look on the children’s faces is sad, especially when they see fathers dropping their children off at school, not to mention that they miss their father’s love. Sanaa adds that attempts by teachers, who have their own professional and personal problems, to deal with the children on a psychological level always fail.

The educational counselor praises the state’s insistence on carrying on with the educational process for the fourth year in a row despite the challenges of war: “The school brings us together. It plays a positive social role in the lives of Syrians.”

Leaks from sources following the cabinet’s last meeting reflect the depth of the challenge the country is facing. The ministers of defense, foreign affairs and education rejected vehemently a proposal to shut down schools this year because of the negative repercussions that such a decision would have on efforts to return to some kind of normalcy on the streets of the country and among its people.

Education is for the rich, not the children of martyrs

There are stark class differences in private schools even though the number of these schools does not exceed five in each province. The number of students in each of these school is a few hundred rich kids at most. The annual tuition fees for each student exceed 125,000 Syrian Pounds ($680) without taking into account other school expenses. The fancy buildings, the gyms and the means of entertainment and education are enjoyed by the children of wealthy Syrians. It is in these schools that you see kids carrying cell phones and chauffeured by their own drivers.

Hanaa, a physician in one of the Damascus hospitals, said that she and her husband were left with no other choice but to register their son in a private school, in light of the overcrowding in public schools which adversely affects a student’s ability to comprehend and learn. She complains about the high tuition fees at these schools but they are still less stressful than the psychological pressure that her son has to endure. She constantly tries to isolate him from the shameful practices exhibited by the children of some officials “who tend to be spoiled.” However, she always fails to explain it to her child.