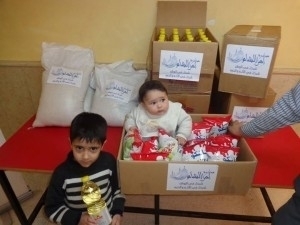 Daraya, Syria – Oum Yasser’s son kept on demanding she made him sweetmeats. But having been displaced with her family from the city of Daraya to the refugee camp of Khan Al-Sheikh, Oum Yasser lacked all her usual ingredients.

So her inventive version of knafeh –  usually made from cheese, semolina and saffron – used boiled spaghetti mixed with ghee and sugar. It quickly became one of the most renowned — as well as one of the cheapest — local recipes.

The ongoing crisis has led to difficult living conditions for many Syrians, particularly those who have been forced to leave their homes to seek refuge in safer areas.

With the situation worsening, few job opportunities and numerous families having lost their breadwinners, many Syrians are turning to food handouts to sustain them.

Baskets provided by organisations working with the displaced through the Red Crescent, the Ahl Al-Sham initiative, or the Syrian Development Organization, usually contain sugar, rice, bulgur, beans, lentils, oil, pasta, and occasionally ghee. There are rarely any canned goods, and lentils are substituted for chickpeas.

Oum Mohammad, 45, fled Daraya to the town of Zakia in the western countryside. The loss of her husband and only son has made her to depend on food handouts, but like many others she uses the products available in creative, non-traditional ways.

For instance, she makes the famous Damascene staple falafel out of lentils instead of chickpeas, and extracts the starch found in rice to use as an ingredient in other recipes.

“I can feed all my grandchildren who have lost their fathers,” she said. “I am the mother of a martyr and of a daughter who lost her husband. This is the best way to ensure that there are enough portions to feed nine grandchildren. I can then make sure that their bellies are full.”

Her neighbour Oum Hani, 35, originally from the city of Moudamiyah, is similarly inventive, using spaghetti instead of vermicelli to prepare rice and sometimes soups.

One cook, Rami, who jokingly refers to himself as a TV chef, has gotten used to substituting bulgur for minced meat in his kebabs.

"I substitute meat for bulgur, and after placing it in water for a while mix in some potatoes, parsley, onions, and spices,” he declared. “Then grill it and enjoy the taste of bulgur kebabs!”

Others replace meat with extra oil and ghee, while others make jam from orange peel and watermelon rind rather than whole fruit such as apricots.

Even the tissue paper from produce baskets is used to make cheap, long-lasting candles for use during electricity cuts.

Many displaced people fear that essential ingredients will be missing from their food baskets, or that quantities will be reduced.

Ali Abbas, a Red Crescent volunteer working in the town of Kaswa in the western countryside, said there was little need for worry.

“There isn’t any change in the food products because the people managing the World Food Program are careful to ensure that the baskets contain enough protein and carbohydrates,” he said.

Food supplies have been stolen in areas controlled both by the government and by the rebels, although volunteers said that this happened mostly at regime checkpoints before supplies reached the aid centres.

Abbas added that it was difficult to organize deliveries to Kaswa, mostly due to the main distribution centre’s lack of cooperation with its satellites.

Nonetheless, Syrians continue to find varied and innovative ways to sustain a dignified life despite the challenges they face.

As Abbas noted, “Necessity is the mother of invention and displacement is its father.”