The American president just wanted to relieve the pressure on regional and international allies, and pull the rug out from under his close rivals in the Democratic Party and his Republican rivals on the eve of the midterm elections and nearly two years before the presidential election 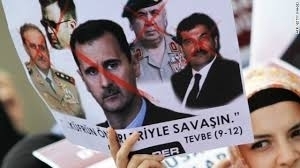 President Barack Obama gulped down the decision that had always been kept away. He has slipped into the Syrian war, which he refused to do three and half years ago. With his loyal consultants he is trying to adjust this involvement, but he knows that it marks the beginning of a fall into the trap of the Syrian conflict.

The American president, a few weeks ago, asked Congress to approve the allocation of half a billion dollars to support the “moderate opposition.” He did not put his weight behind the demand, [there was] just an e-mail from the White House to Congress. He was not enthusiastic about the idea, he just wanted to relieve the pressure on regional and international allies, and pull the rug out from under his close rivals in the Democratic Party and his Republican rivals on the eve of the midterm elections and nearly two years before the presidential election. The request was made without muscle; political weight was on the other side. At the time that he requested an authorization from the Department of Defense (the Pentagon) and a budget for arming and training the Syrian opposition, he repeatedly mentioned the Syrian opposition’s lack of organization, saying that it was made up of “pharmacists, farmers, and doctors.”

Many analysts and Western officials were expecting an event that could change the equation and unleash a dynamic that would push Obama to the edge of the difficult decision. The sweep of the “Islamic State” (IS) through western Iraq and eastern of Syria and the slaughter of American journalists provided the popular base for a “war on terrorism” and lowered the gates to any escape from the decision. Obama formed an international alliance of 40 countries against terrorism; he hit IS sites in Iraq and authorized the air force to collect information about the organization in Syria, and after consulting his allies he implemented a “strategy.”

Remarkably, however, the moderate Syrian opposition suddenly turned from “just” farmers, pharmacists and physicians— and the idea of arming and supporting them from a sort of “fantasy”— to quite the opposite. Obama “The Reluctant” pushed Defense Secretary Chuck Hagel, Secretary of State John Kerry, and Army Chief of Staff Martin Dempsey to defend the project of training and arming the opposition. The Syrian opposition has become “capable” of stopping the spread of IS. It has become a giant, able to fight on two fronts against both the regime of President Bashar al-Assad and the organization of Abu Bakr al-Baghdadi. All it needs is arms and a training camp after undergoing selection.

According to Western officials participating in dialogue with the American side, “For the first time we have an American strategy, it’s not great, but there is a strategy.” This strategy has become “clear.” Yes, clear. Its elements include [the stipulation] that the Syrian regime is not a partner in the war on terrorism, while leaving open the possibility of passing along information to it through a third party to respect the rules of engagement. The priority now is to fight IS in Iraq, because the conditions were present and the process is easier—there was a request from the Iraqi Consensus Government headed by Haider al-Abadi, and there are Kurdish and Iraqi forces that are able to “fill the void.” And there is a regional and international understanding about this solution, whereby Iraq’s request provides the legal and political basis to expand strikes into Syria, which abandons respect for the Syrian-Iraqi border, which has not been respected by IS.

But the war on IS in Syria is not yet white hot—no need to hurry or rush into it. The West believes that to strike IS now would help the [Syrian] regime. Therefore “never mind if the regime bleeds a bit longer" While the regime bleeding, the west increases support to the “moderate opposition.” The flow of weapons has increased in the last few weeks from north and south of Syria, and the number of those who received training also doubled, with [greater] pressure on the opposition to unite and “moderate”—moderation means the announcement of a public stance against IS. Didn't the leader of the Syrian Rebel Front declare a “comprehensive uprising” against the organization and the regime? Didn't the five factions unite, including Brigade 13 and Brigade 101 under the banner of The Fifth Legion in the countryside of Idleb in the northwest of the country, and with twenty factions from the Ghouta area of Damascus?

Over the long term, the most important step was approval from the American Congress, with all its deputies and senior members, to finance the training and arming of the moderate opposition. Despite the severe control over the decision— and the previous existence of a secret training program— it is the most obvious American institutional and legislative involvement in the Syrian war. It is not a short-term involvement, but a long one, for years, that opens the door [for the U.S.] to dig in and dive deeply into the Syrian morass. It's the beginning of a political slide, whereby a terrorist bombing in Europe or America that originated in Syria could drive nearly any decision, up to the establishment of a buffer zone in northern and southern Syria. At least this is the bet made by some enthusiasts, and critics of Obama’s hesitation and his “giving in” to sailing into the Syrian mire and wading into its mud. Or this could all stay on the legislative shelf and in the corridors of politics until the coming of a new American president in two years. But this slide has pulled hard on American institutions, and it is difficult to go back on it.

What about the tactics and strategies of the [Syrian] regime and its allies?

The difficult bet was that the regime would be a central part of the war on terrorism. The regime leaked a lot of information—some exaggerated and some real—that the western countries have restarted direct security coordination to fight IS. The regime’s allies also leaked [the idea] that it does not matter who fights IS, as long as the group is fought, with or without coordination.

At the beginning, the regime’s loyalists and allies celebrated the horrors of IS because they proved the theory, so beloved in the hearts of loyalists, that the war is one of sectarianism and jihad against the secular system. [In this theory, the war] is a proxy war, in which the [Syrian] secular system is a natural ally against these extremist groups. The war is able to restore [Syria’s] role in the war on terrorism, this time in Syria, not outside. But later, loyalists feared atrocities [that the regime committed], and cracks appeared among the regime’s popular base on several occasions.

The vanity of victory that prevailed two months ago is now in doubt and under question. Death, destruction, and torture on the edge of opposition and “liberated” areas, victims and deaths in “the occupied Syria.” Loyalists were talking in a low voice behind walls about the “absurdity of war,” and expressed concern about the future and [their] survival. Their voice, which first appeared on social network sites and at the funerals of soldiers from the ranks of the regime, has become more like a murmur after restrictive actions were taken against the activists who were among the core of loyalists. The regime ignored their demands, just as it ignored the opposition in the years past. Some loyalists wanted a strictness paralleling that [enforced by] IS leader Abu Bakr Al-Baghdadi.

In Damascus, the regime wagered on the proposition that the war on IS would open up the gates to restore legitimacy [to the regime] and erase the history of the past three and a half years. But the bet turned to worry, with concerns that there might be schemes lurking behind the American “strategy” [against IS]. The change is seen in official Syrian discourse, and those of its allies; Moscow warned that the strike against ISIS came without authorization from the Security Council. Iran also warned against the “attack” on Syria, with the regime threatening to respond to the bombing of IS sites without coordination. This was the clearest expression of a great disappointment for Damascus. From the start, the war [against IS came] without cooperation.

There is disappointment, but the hope is not yet gone. Syrian officials have taken up the new international envoy Staffan de Mistura to convey messages to the West, aiming to place themselves within the international alliance. The Syrian regime offered for the regular army to “fill the void” after the strikes on IS. So, it won't harm if it plays with some hidden cards and calls for bids. Suddenly, too, came the announcement that three new chemical installations, not previously announced by the Syrian government, had been detected. It is a return to investing in the chemical weapons issue, and warning about their falling into the “wrong hands.” The Syrian regular troops did not strongly defend their positions near the demarcation line with Israel in the occupied Golan in the face of Jabhat Al-Nusrah’s progress, [putting] Israel's security at risk. Internally, sources have discussed Assad’s dismissal of his cousin, Colonel Hafez Makhlouf, from his post in charge of Damascus Security, and the dismissal of Faisal Sumac,from his role managing the famous Tobacco Corporation. But the importance of these dismissals must not be exaggerated in light of previous experiences.

On the ground, the horse Obama bet on, the “moderate [forces],” has been exposed to harsh blows. A buffer zone between the regime and the organization [IS] has become the subject of targeting, with several mines exploding. Within only a few days, [several] military commanders of the Ahrar Al Sham Islamic Movement were killed in a mysterious bombing in northwest Syria. There was also the assassination attempt on the commander of the Syrian Rebels Front, Jamal Marouf, in an air raid in Syria, while of the leaders of the Hazzm Movement, classified by America as a moderate group, were killed in a raid on the Homs countryside. And IS became capable of shooting down a Syrian military aircraft in the northeastern part of the country. The group, happy that America has fallen into the “trap,” is betting on America’s mistakes and the cracking of the international alliance. IS will force Jabhat Al-Nusra to make a choice where it had been hesitating: Make war against IS, or make an alliance.

That the moderates vanish or are ripped to shreds before the American pack arrives is one of the challenges that will face Obama's strategy. But also, the existence of the other agendas of regional parties and disagreement among NATO’s international alliance represent more challenges.

It is clear that each party will undertake “pre-emptive strikes” to impose facts before the strategy starts to have its effects, and before its train leaves the station. Strikes tend to establish buffer zones with this new strategy. IS tried, under the eyes of Turkey, to cleanse the border of Kurds, trying to institutionalize a region that revolves within Turkey’s orbit.  Also, strikes in the Golan under the eyes of Israel open the horizon for a buffer zone too, as well as well as the case for the regime and IS to “cleanse” the buffer zone and the pockets that in between.