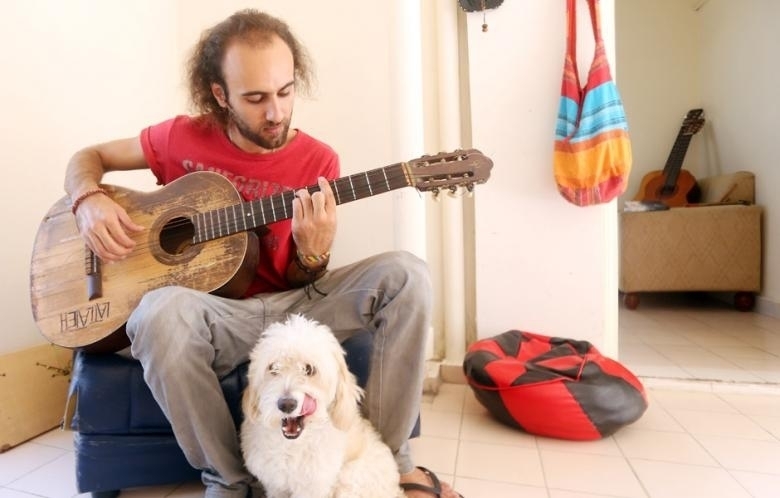 Rap music had found its way to the Syrian music scene from the 1990s onwards. Since then, many young Syrians saw rap as a way to express their many concerns and problems. However, a radical shift would occur in these issues at the beginning of 2011, as young Syrians found themselves facing new and unfamiliar themes: revolution, war, sectarianism, opposition, and loyalism, in addition to displacement and exile, which made the youth experience a different kind of life and suffering that varied from place to place. Amid such circumstances, rap has proven to be one of the best outlets for them to cope with these challenges.

I thought the siege between us a barrier,

Distance is tough, but waiting is grittier,

Living in a horror film, in an abattoir,

You say I’m nasty except corpses are nastier

(loose translation of an excerpt from Poem 15 – the besieged Yarmouk camp).

He has nothing but his voice left. No food, no water, no sleep, no electricity…nothing. He has only his voice, which he uses to sing about the pain there, in the alleyways of what was once called the Yarmouk refugee camp, where he had spent most of his life.

Before he lost all those things, Raed Ghoneim – or Gilgamesh as he is now known – had his love of music, which began with Arabic rap in 2008. It became his lifelong passion, and in the beginning, it was fun…

“I used music to shed light on the problems of Palestinian refugees and young people in the camps,” he says. “My attempts were simple and unremarkable.” Then war took the camp by surprise, and death became normal. Gilgamesh lost everything, except his love of music.

But this love was unrequited: The war that came abruptly to his camp destroyed everything. “I was deprived of all material useful to [making] music,” like studios, recording equipment, keyboards, and so on, Gilgamesh said. “I wanted to express my pain, so I resorted to the ‘spoken word’ and had to do without any beat. I use my mobile phone to record…and post music on YouTube.”

Gilgamesh did this during the siege. He said, “I would film myself singing the words without music and post the video. When you are under siege, and your suffering is growing day after day, your priority becomes to write and convey your pain to the world, to let them know for example that you are starving.” Before he left the camp, Gilgamesh made a video titled “Poem 15.”

Your face is sweeter without the shelling,

Taking to human flesh a liking,

My throat is dry, so I’m wishing,

Water would come, even if it’s dripping,

Six months of starvation, the truce comes for the dying,

While the graveyard is growing, and growing

(loose translation of an excerpt from Poem 15).

Gilgamesh wrote Poem 15 and then left Yarmouk. As he sought refuge in Lebanon, he asked himself “Now what?” During that period of anticipation, he met in Beirut a number of other rappers, including some he had already been in contact with when he was still in the camp. His passion for music was rekindled, and today, he is working on a musical production to tell the story of the refugees, “who are humiliated in their host countries, or who are swallowed by the sea when the illegal smuggling boats carrying them sink.”

The Syrian rapper known as Watar, or ‘Chord’ in Arabic, has been singing from the Sarouja district of Damascus all the way to Beirut. He fled to Lebanon from death, which did not spare his friends but spared him in the end. Watar’s real name is Khairy Eibesh.

Before he became a refugee, he was a member of the Syrian band LaTlaTeh. For months, he lived under the bombardment, before he escaped certain death. During that period, which he spent holed up in his studio, he would draw inspiration for his songs from the shelling, and the humiliation he faced at the checkpoints “and other personal experiences that are in one way or another linked to the revolution.”

I lay on the ground wondering,

Has anyone seen my Adam’s apple?

On the side of the road lies half of my intestines outside my stomach,

and beside me writes a banner, “beware, martyr.”

I lay on the ground wondering,

The black car thrown behind me, I remember it was blue,

Is there a microwave big enough to fit it?

(excerpt from the song Boom Boom Bam, translated by http://blog.nouralali.com/latlateh/)

Now in Beirut, he writes about his views and opinions about various issues. “Everything has changed, whether it is the social or political environment, or even work and music. Many doors were opened to me, like theater featuring music, which does not resemble theater in Syria. Here, there is a broader musical culture,” says Watar, in reference to the changes that have affected his music after he left the studio in Syria to Beirut.

Nevertheless, the picture remains blurry for the Syrian rapper. His environment has changed, which plays a role in shaping his ideas, music, and songwriting, and naturally, their reception. “I still don’t believe that there is enough space for us to say what we want to say. There are still obstacles and barriers that need time to be removed.”

I stand on my feet feeling lightness,

I see my remains in front me and as it turns out I left my body,

and here is my neighbor thrown in the middle,

every piece of him is thrown over the hallowed street

My wife lays next to him, she did not follow me yet, she is struggling,

(Excerpt from the song Boom Boom Bam, translated by http://blog.nouralali.com/latlateh/)

Watar says, “Beirut has something to teach everyone. It has its own ways, and yet, you can see it has two faces: One that tells you, you are better than many others, and another that tells you: You have to be better.”

“My experience grew in terms of my music, and my collaboration with various nationalities, which were rare and unremarkable in Syria, like my work with musicians from Egypt, Jordan, Beirut, and elsewhere.”

He concludes, about Beirut as well, “Here, we can talk freely, unlike in Syria. But you need someone to listen.”

This article is an edited translation the Arabic Edition.