When a certain tribe joined the Nusra Front and became its leader, it was isolated. Other tribes refrained from joining the organization, since tribes usually refuse to be led by rival tribes at any cost 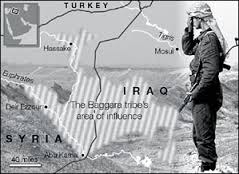 No researcher can give the exact number of Syrians who have tribal origins, since any kind of research or statistics on this group were forbidden by the Syrian government for over half a century. An approximation can be made by counting the populations of Deir-ez-Zor, Raqqa, Hassaka and Daraa provinces, where almost all people are considered to be of tribal origin, in addition to about 2 million individuals from Aleppo, as well as roughly 10% of the population of Idleb, Hama, Homs and al-Qunaitera. This gives us a rough figure of over 30% of the total population of Syria, according to the latest statistics from January 1, 2011. These provinces occupy over 40% of Syria’s territory.

The northern and northeastern areas of Syria, which are populated by the largest number of Syrians of tribal descent, suffer from the highest rate of poverty and illiteracy. This is due to a policy of impoverishment and enforced ignorance pursued by the regime to weaken the large tribal groupings, which, if united, would threaten its authority. According to a report issued by the UN Development Program in 2005, “The eastern rural and urban areas (Idleb, Aleppo, Raqqa, Deir-ez-Zor, and Hassaka) had the broadest, most intense, and deepest level of poverty.” It also notes that “Poverty in northern Syria is four times greater than in the coastal areas.” The second National Report of the Goals of Development for the Third Millennium issued by the Syrian state’s planning committee in September 2005 says that “The percentage of those between (15-24 years) who can read and write in Deir-ez-Zor and Raqqa is the lowest – 78.3% in Raqqa and 78.1% in Deir-ez-Zor.” The national average is 92.5%.

The only place in which the tribes could use to express themselves in Syria was the few seats set aside for independent candidates from each province who did not belong to the Baath party or allied parties in the Progressive National Front. Tribal elders in each of tribal province used to compete for these seats, and the identity of the winners of these elections are suggestive of the tribes with the largest number of descendants. These tribes are al-Bakkara, al-Jabbour, Shummar, Tai, al-Afadleh, al-Weldah, al-Hadeedien, al-Bobna, al-Bomaneh, al-Mwali, al-Naiem, ‘Anezah, al-Fadous, and  al-Fawaara. There are also a number of small tribes from Daraa: al-Mahameed, al-Masalmeh, Abazeed, and al-Zoubi, and Kurdish tribes who were excluded the sake of Syria’s Arab national identity, including al-Maleiah, al-Dakouri, al-Hferkan, al-Kiki and al-Marsineih.

Tribes and the State:

Tribes have been allocated parliamentary seats since the formation of the Syrian state in 1919. In 1928, they were provided Article 13, which stated that “A special administration is to handle the affairs of the Bedouin tribes. Its role is determined by a special law that takes into account their uniqueness.” In February 1959, during the period of Syrian-Egyptian unity, President Gamal ‘Abd al-Nasser revoked this law. When the Ba’th party took power, it stopped dealing with customary tribal laws, considering them to be obsolete and destructive. But Ba’th party leaders secretly used tribalism as an instrument of control, creating an internal conflict inside each tribe by marginalizing traditional elders and mobilizing a lower class to compete against them. To limit the role of the tribes and prevent them from competing with the state for power, the members of large tribes were marginalized and prevented from playing significant political roles. The state also intentionally fostered poverty and poor education in tribal areas, failing to open a university in any eastern province until 2006, almost half a century later than in Syria’s other provinces. Moreover, systemic corruption and Syria’s variety of state capitalism led to the exploitation of the region’s agricultural production, which represents about 60% of Syria’s overall agricultural production. Local residents were also forbidden from working in the region’s oil sector, while the security forces gave high-income jobs to people from coastal regions.

Tribes and the Revolution:

When the revolution started in Daraa, tribal concepts like honor and mutual aid make protestors resolute. Tribal enthusiasm for the revolt and tribes’ relations with one another played a major role in the development of the protests and armed actions as the uprising spread eastward, leading to tribal areas’ rapid liberation.

The tribal nature of the revolt was obscured by geography, as armed groups named themselves after the village or town from which they hailed. Though these names do not refer to the tribes themselves, they stand in for the tribes who inhabit each village or town.

All Syrian tribesmen are Sunni Muslims, but there were two attempts to mobilize them along sectarian lines. The first was during the 1980s, when Jameel al-Assad – Hafez al-Assad’s brother – formed an association called al-Imam al-Mourtada that aimed to unite all tribes which purportedly descend from prophet Muhammad’s family and convert them to the Shiite sect. This association was dismantled soon after it was formed, supposedly on the personal orders of Hafez al-Assad. The second such attempt was in the 1980s, when Iran tried to open communications with members of tribes that purportedly descended from prophet Muhammad’s family and convert them to the Shiism. This attempt also ended in almost complete failure.

It is assumed that the jihadists first came into Syria from Iraq, through tribesmen fought alongside them since the beginning of the American invasion in 2003. The members of one branch of the al-Ekedat tribe, from the town of al-Shaheel, played an important role in forming and launching this movement. Their town was regarded the headquarters of Jabhat al-Nusra in the eastern and northeastern parts of the country. Later, when the Nusra Frotn broke with ISIS, a tribe related to the al-Ekedat joined al-Baghdadi’s organization, which is in competition with Nusra for the leadership of the region’s jihadists. ISIS defeated Nusra in the summer of 2014, and is now the dominant jihadist force.

ISIS today exercises a form of hegemony over Syria’s tribes, attempting to eliminate tribal identities while maintaining the necessary relationships to exploit them as needed.

When a certain tribe joined Nusra and became its leader, it was isolated. Other tribes refrained from joining the organization, since tribes usually refuse to be led by rival tribes at any cost. Yet the numerous disputes between tribes force them to join other organizations to become stronger. For example, al-Weldah tribe in Raqqa joined the Nusra Front, causing its rivals in al-Afadleh to refuse to join that organization. The al-Afadleh later joined ISIS when it split from Nusra.

Tribalism is a paternal social structure, and it bases its identity and interests on kinship. This contradicts the structure based on religious unity, which Salafist Islamists hope to build. In other words, there is a contradiction between the worldly relations based on kinship and the abstract, spiritual relations based on belief. Islamic rulers have suffered from this contradiction ever since Islam’s formation in the tribal Arabian Peninsula. They have not been able resolve this contradiction and have had to adapt to it. Tribesmen have kept their primary tribal identity, which is based on kinship, and Islam has formed their secondary identity.

It is obvious that Abu Bakr al-Baghdadi specifically directed the declaration of the formation of “Islamic State in Iraq and Syria” to Muslims and tribesmen. Being experienced with this contradiction, he discriminated along religious rather than political and social lines. This distinguishes the tribes from extremist organizations like ISIS. But, to be accurate, Islam as a religion is a major part of the tribes’ identity, and only religious extremism competes with their main tribal identity. For instance, they believe strongly in Sufism, which is known to be limited to the spiritual among them.

Tribesmen are known for the fluctuation of their political allegiances, and their support for the strongest power in their region. For the tribes, loyalty to the most powerful faction promises loot, the pillar of tribal economies throughout history. The benefits they receive from political allegiance do not entail an obligation of continued loyalty. Tribes switch allegiance if their support for the strongest faction leads to their exploitation, or if a more profitable opportunity presents itself. They are currently aligned with jihadi organizations because this serves their interests, but this could change as soon as they find another alliance that would serve them better. It is worth mentioning that the Iraqi tribes’ abandonment of the jihadists in 2007, also known as the “Awakening,” was reversed when their monthly $200 million in funding was halted.

Ending the current coordination between the tribes and the jihadists requires support for tribal independence, and Syria’s tribes rid themselves of extremist influence. This also requires avoiding the political, economic, educational, and military neglect of the tribal regions, and filling the void occupied by jihadists.

In the long run, the development of the tribal regions must be pursued, along with effective national policies to lift them out of the poverty and ignorance that incubates extremism and violence. State agencies, civil society, and political parties should push these tribesmen join a national unity effort to end the isolation and underdevelopment of this region. Finally, the phenomenon of tribalism should be viewed as positive – it holds many risks that can be avoided, as well as many opportunities. Tribal affiliation is harmless if it does not turn into a super-state or sub-state loyalty.