The paintings carry the spirit, seed, symbol, and engine of the revolution 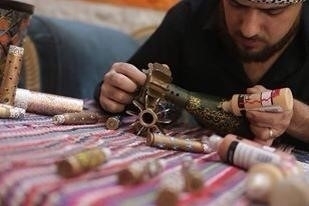 Akram Abo al-Foz is called “the artist of Ghouta” by the inhabitants of Western Ghouta and his followers on social media networks. He inceasingly converts whatever implements of death and destruction he finds in the besieged areas and battlefields in which he lives into pieces of art that decorate the portion of his life that the siege and war, apparently, have not been able to paint with the color of death. Thus he turns the residue of destruction – shell casings and weapons, missiles and bombs, which fall day and night on his city – into paintings and purely aesthetic objects.

The fragments of munitions and glass are the raw materials he uses to create his artistic masterpieces. He has converted unexploded rockets, after painting and decorating them, into kinds of antiques, just as he has done with remnants of bombs and bullet casings. He uploaded his exhibition, described above, onto social media under the title ”Drawing on Death.” His desire to develop his methods has pushed him to search for new materials and recreate them using his skills, as seen above. In the same way, he has found a new material called ”Kipond,” which is a substance commonly used in the manufacturing of advertising boards and the facades of shops and buildings. He has collected Kipond from the ruins and recycled it. In an exclusive interview with The Syrian Observer, Abo said, “We did not use this material before, but I found an easy to handle material, and painted and polished it as glass.” The artist indicates that it is well-known how difficult – or nearly impossible – it is to find basic painting supplies under the siege. The price of wood is also high, since the population uses it for heating fuel. He therefore found a solution to the problem of how to paint in these circumstances, collecting what he needs from the ruins, cutting it, and reshaping it using a handsaw. He then gave the whole world his messages through painting.

This is How I See It

This is the name of the new art collection. The first painting is against a black shining background, curved edges, and frames surrounding Syria’s map, which occupies the center. The first painting shows Syria as united and complete, covered with gold, and planted with white jasmine, which extends through the entire space of the painting. Through colors, the artist expresses what he means by this: he made the heart of jasmine flowers bleed, coloring the jasmine’s white with red. The artist aims to underline the killing and bloodshed from which Syria suffers.

Another painting tries to remind the Syrian people and the whole world about the diversity that has always distinguished Syria throughout its history. The map of Syria is, again, as he sees it: full of colored stones; polished, neatly-arranged, and equally-sized pearl beads in a metaphor for that diversity, which give the map of Syria a beauty that disregards the distorted statements that aim to divide Syrians, crush their unity, and sow hatred among them, made by Asad’s killing machine in its war against the Syrian people.

Muhammad has never been a rights activist, and was not previously a proponent of women’s liberation. But as he says, he discovered women’s liberation through the revolution. For him, Syrian women are no longer just women, but are measures of citizenship, revolution, and safety. A picture of a Syrian woman picture is in the middle of this map, with no colors decorating her but black and white. These are a metaphor for the state of fatigue in which she lives, while her sharp, steady, shining eyes look toward the horizon and her black hair scatters through the space of the picture. The artist wants, as he explains, to scream for this suffering woman. He stresses that he sees ”the Syrian revolution as a fatigued woman, but also a rebel who has lived through all kinds of tragedies. She still stands full of hope.”

The most important painting carries the spirit, seed, symbol, and engine of the revolution. This painting contains what the artist sees as the decisive, historical word, which has persisted through four years of revolution: “freedom.” With all of the distortions that have struck the revolution, and with the current apparent absence of this single but original word, “freedom” still remains the embodiment of our dreams and ambitions, and represents our ultimate goal, because there will no longer be any silence before the regime’s tyranny, despite the revolution’s seemingly long road ahead. The march toward the freedom has begun, and all that is happening is nothing but the labor of its long-awaited birth.

It is impossible for Muhammad to display his art in his own gallery, especially given the oppressive circumstances under which he lives – bombardment, poverty, and insecurity. For these reasons, his Facebook page is the only window through which he can display these paintings. It has become a true artistic shrine, where followers can observe the newest works that so many websites and newspapers have written about and Syrian and Arab TV stations have displayed.

Akram Abou al-Foz, a young man in his mid-thirties, was one of the first participants in the revolution. He spent half a year in Assad’s prisons. After his release, he returned to his hobby of transforming the remains of weapons and rockets that had fallen on continuously-besieged Eastern Ghouta into pure artistic forms. He says that the distortions and the various accusations made against the revolution have made him more determined to let loose his scream from inside Douma city, whose besieged citizens the regime continues describe as terrorists and radicals because they insist on taking the path of revolution and freedom. Through his paintings, Akram wants to show what he sees and believes to be the peaceful, beautiful, and civilized nature of those people.