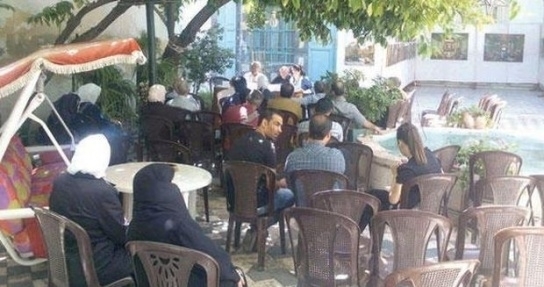 Damascus’ Old City, the ancient heart of the Syrian capital, witnessed an interesting phenomenon during the 1990s, one that quickly bordered on becoming a craze: denizens began converting some of their traditional Syrian homes—some dating back centuries—into restaurants, hotels, cafes, and other tourist-friendly destinations. One of the first instances of this came when the grandchildren of famous Syrian poet Shafiq Jabri turned his old home into a restaurant—aptly named Beit Jabri (Jabri’s House). Other “houses” soon started popping up throughout the Old City, with names like “My Grandfather’s House,” and “My Grandmother’s House.”

Despite the violence currently gripping Syria, the tradition of converting old houses has continued, though in slightly modified form: a number of children, grandchildren, and other family members of famous Syrian literary figures have decided instead to turn their old family homes not into restaurants and cafes, but into cultural and literary centers. And though such venues may not be as profitable as hotels and restaurants, they help fulfil another function: helping the family members honor the memory of their late relatives and their family histories, as well as encouraging cultural activity in their city—especially at a time when so much Syrian culture is being destroyed.

One of the latest incarnations of the trend involves the home of legendary poet Khalil Mardam Bey, best known for writing the lyrics to Syria’s national anthem. The house, which was built in the 16th century, is a traditional Damascene one, a two-storey building covering a total area of 600 square meters, with a spectacular courtyard complete with fountain. It lies in the Al-Hariqah area of the Old City, which remains, as it has done for hundreds of years, one of the capital’s main shopping hubs, neighboring the famous Al-Hamidiyah Souq.

The cultural center was launched last February by Mardam Bey’s grandchildren, the children of his son, Adnan, who also became one of the country’s best-known poets, living in his father’s house until his death in 1988. The center has since hosted a number of events, the latest of these a poetry and youth festival marking the centenary of Adnan’s birth and the re-publication of his entire works by the Syrian General Authority for Books.

One of Adnan’s children, daughter Hend, told Asharq Al-Awsat that despite its recent transformation, literary and cultural events are actually nothing new to the house. “There hasn’t been a single eminent Arab literary figure or prominent Orientalist who did not visit this house,” she says. Among those of the Arab literati who came to visit was “the Prince of Poets,” Egyptian Ahmed Shawqi, in 1924, who was given a unique welcome to the home when Hend’s grandfather presented him with a poem he had written especially for him—Greetings to Shawqi—upon his arrival.

“How could we turn this historic house into a restaurant, say—or even sell it?” she asks. Hend admits the family have been offered “large financial incentives” over the years to sell the house.

“How can we sell our history?” she continues. Over the years the house has played host to some of Syria’s most important political figures. One of its former occupants was Jamil Mardam Bey, who was the country’s prime minister twice during the last century and one of the architects of Syria’s independence from, first, the Ottomans, and then the French.

“This house was a stage for several historical, political and literary events. From here the first sparks of the 1913 revolution against the Ottomans were lit, when the house hosted Damascus’ first ever civil political conference,” she says.

“During this conference it was decided to unite the Arabs and call for their full rights. The first moves for Arab independence were made inside this house. It also hosted a number of conferences dedicated to fighting the French occupation.”

Since independence from France, the main activities in the house—aside from the daily domestic routines of those living in it—became strictly cultural and not political. Hend’s father Adnan began to host weekly literary salons there every Wednesday since the 1950s until his death in 1988.

By that time, however, the house was in bad shape. “It was difficult for us, the children of this house,” Hend recounts. “We went through periods when we lost all hope, as the house was deteriorating in front of our very eyes due to its age. We didn’t have enough money to make the repairs, as they would have been very expensive, requiring money we did not have at the time.”

At one stage she and her siblings even thought of renting out the house to a foreign cultural institution, as happened with the 13th century Aqad House, which now houses the Danish Institute in Damascus.

But eventually Hend and her four siblings managed to scrape enough together to make the necessary repairs to their beloved home. “We managed to restore it to what it was, and we stayed there until 2011,” she says. Hend now travels between Damascus and Morocco, but her mother and younger sister continue to live in the house.

“We will return to occupy a large part of the house once all the repairs are done,” she says. “And we hope that it will continue to be a meeting place for literary figures from Syria and the Arab world, and to host cultural and literary events on a regular basis.”

Hend says the family is planning to resurrect the Wednesday salon tradition that was established by her father. They also hope to hold concerts and events celebrating Damascene folklore and tradition.

There are even plans to turn part of the house into a museum, she says. “My father had many belongings, many of them very expensive, and among them a library of rare books, which we have been able to archive properly recently, and we plan to open it to readers for two days a week. There are also old artefacts [belonging to Adnan] such as rugs, mosaics and ceramics, and valuable documents currently at the Center for Historical Documents in Damascus which we plan to return once we convert a part of the house into a special museum.”

So despite all the odds, the old Mardam Bey family house has been given a new lease of life: you won’t be able to smoke hookahs, or sip strong, dark Turkish coffee within its walls, but you may discover a rare book, or meet a poet or two.