We see that holding a new Syrian National Congress – with the participation of all political forces and parties, and representatives of all Syrian communities – will provide Syrians with a dialogue to harmonize a vision for a revised political system and a constitution to help achieve their aspirations 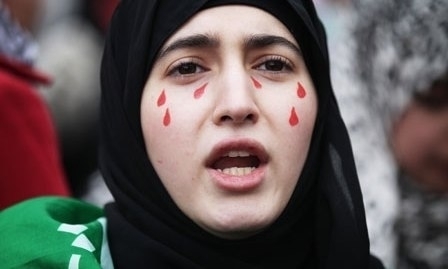 Four years ago, a large part of Syria’s population demonstrated freedom and a better future, away from fear, tyranny and injustice. Unfortunately, what transpired instead was the death of more than 300,000 citizens, the displacement of over half the population, the dismantling of society and the destruction of their cities and economy. Furthermore, Syria has become a hotbed for terrorism in all its forms, and a stage for all types of regional and international interventions. However, there are still some parties that claim victory, just to keep the regime in power, despite widespread destruction of the country and its society; a place that had coexisted for centuries in the face of trying circumstances.

Such events would not have occurred if the regime’s response had been different, if it read developments wisely and listened to the guidance of its advisors. It also would not have happened if the international community had carried out its duty to protect international peace and security. The efforts of the Arab League failed to find a solution, and the efforts of the international mediators failed to devise a way out of this disaster, while world powers – which hold the key to global security and peace – refused to impose the international will to end the blood and destruction, targeting the interests of the Syrian people instead. Both the initiatives of the friends of the Syrian regime and the friends of the Syrian people have failed. None were able to develop a solution to achieve peace and preserve the national and geographical unity of the Syrian state; and as a result, all are responsible for this failure. Nevertheless, it is still a necessary to formulate a strategy out of this tragic situation.

Neither the Syrian regime nor the opposition has succeeded in imposing a solution to the crisis. The opposition cannot expect to triumph if it fails to achieve a balance of power with the regime – a balance that forces Assad to sit at the negotiations table and reach a solution.

The continuation of the status quo is not in the interest of Syria or regional and international security and peace, instead, the perpetuation of this crisis is a recipe for breeding the tendencies of extremism and terrorism. If the Islamic State (ISIS) and Nusra Front were to be eliminated today, what guarantees would prevent a similar threat from filling the vacuum in the near future? It is time, once again, for the Syrian people voice their desires; away from the regime and the terrorist groups which aim to hijack the revolution, and away from all regional and international interventions.

With all their accomplishments – cultural, philosophical, and scientific – the Syrian people have contributed to the development and progress of human civilization for thousands of years, and they will endure and find a way to salvation if there is no intervention. In the history of modern Syria, there is an event cherished by Syrians who consider it a milestone in their political history: the Syrian National Congress of 1919, following the liberation of Syria after the First World War. Syrians held their own congress, without intervention, to formulate the shape of the state and system of governance they desired. Despite the project’s failure resulting from French occupation, the event remains a model that could be emulated in the drafting of a new and promising Syrian future.

We, the authors of this article, see that holding a new Syrian National Congress – with the participation of delegates from all political forces and parties, representatives of all Syrian communities, of civil society organizations and of both pro-regime and opposition cities, towns and tribes (no matter how high the number of participants may be) – will provide Syrians with a dialogue to harmonize a vision for a revised political system and a constitution they strive for to achieve their aspirations.

Therefore, we suggest the following:

The Syrian regime has repeatedly stated that the holding of such a Congress is in its interest, only after achieving victory over so-called "terrorism", but Syria may disappear as a unified state if the regime insists on a return to the past; such a an attempt will not succeed. If the Assad regime works for the benefit of Syria, it must approve the Congress in an effort to save the country and its people.

It may not be easy – especially in light of current circumstances and in the presence fundamentalists in many regions of Syria – to think of such a proposal, but it may be the only chance to separate the Syrian crisis from terrorism, and consequently combat it. When Syrians agree on a solution to their cause, the unification of Syrian ground forces will be clear, making it easier to succeed in the war on terrorism.

The continuation of the bloodshed and the suffering of its citizens, at home and abroad, and the growing number of deaths per day, is a embarrassment on humanity as a whole, and allowing it to persist will only keep the Middle East in turmoil. Saving Syria is a moral and political duty, but let us let the Syrians have their decisive word. They will bestow the national legitimacy to a party that no one can attempt to bypass; neither from the regime and its supporters, nor from the terrorist groups and theirs.

The United Nations and its envoy, Staffan de Mistura, should dedicate their efforts towards achieving this vision, instead of relishing in bogus settlements that differ scarcely from the attempts of his predecessors to find a solution to the crisis.

Let us save Syria.