The Observer reports from Geneva on the progress, or lack thereof, surrounding the long-awaited peace talks between the Assad regime and the unified opposition 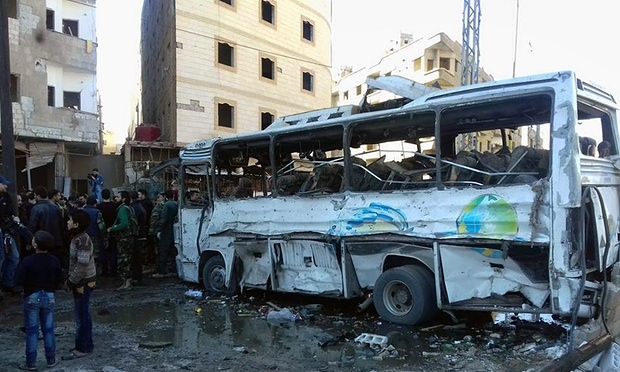 The scene appeared very glum in Geneva this weekend, not only for the reporters following the Syrian negotiations but also for the participants themselves. The Syrian Observer spoke with a number of members of the opposition delegation attending the new round of negotiations, but they had very little news to offer – and not because they were hiding anything.

You only need to pass by Hotel N’vy, where the opposition are lodging, for 15 minutes to feel depressed if you care anything about the Syrian people. Dozens of politicians and civil society activists pile in the lobby and spill out on the street smoking cigarettes and looking bored. There are more reporters and photographers there than politicians, looking for any piece of news, but in vain.

It is confirmed now that the UN special Envoy Staffan de Mistura will meet separately with the delegations of the Assad regime and opposition on Monday, February 1.

A spokesman for the opposition’s delegation confirmed the statement in a press conference on Friday evening outside his hotel.

This will be the second time de Mistura will meet with the opposition delegation since arriving in Geneva, after he visited the team in their hotel this weekend in a symbolic act of reaching out.

Following the meeting in the hotel, de Mistura told reporters that there is hard work being done, adding “I am optimistic and determined because it’s a historic occasion not to be missed.”

In the meantime, civil society representatives are trying to demonstrate their views regarding the negotiation.

On Thursday, the Transitional Justice Coordination Group, a coalition of 15 NGOs, is organizing a side event at the UN headquarters to remind negotiators of the minimum conditions on accountability and justice that Syrians will not agree to compromise on.

The Assad regime’s representative at the Geneva peace talks, Bashar Jaafari, used the media spotlight to lash out at the Kurdish Democratic Union Party, which has started to distance itself from the position of the regime camp.

Jaafari said Damascus would show zero tolerance for any claim of federation or autonomy by the Syria’s Kurdish minority.

“Take the idea of separating Syrian land out of your mind,” Jaafari told the Rudaw website, adding that “anyone thinking of departing Syria” should be cured of the illusion.

Meanwhile, 50 people were killed and dozens more injured on Sunday in coordinated bombings near a Shiite Muslim shrine in Damascus as Syrian government and opposition officials exchanged accusations at the long-awaited UN peace talks in Geneva. The attacks were claimed by the Islamic State group.