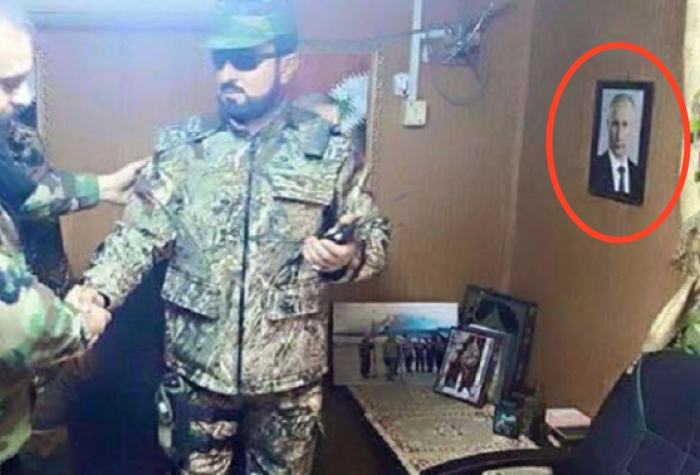 Officers in the Assad regime’s forces have begun posting pictures of Russian President Vladimir Putin on the walls of their rooms and offices, as the spread of Putin iconography has become increasingly routine – and sometimes necessary – at entrances to cities which regime forces still control.

In recent pictures published by pro-regime social media pages, Colonel Saheel al-Hasan, nicknamed, “The Tiger,” appeared with a number of other soldiers while a picture of President Putin hung in the background. This is a phenomenon rarely seen since the Assad family took power in Syria about four decades ago, as few Syrians – civilian or military – would have dared hang pictures of foreigners in their offices.

Commenting on the picture of Putin in the office of Colonel Hasan, opposition accounts noted that “Putin has become the only commander in Syria, while Assad has become the tail,” particularly since Alexey Malashenko, the chair of the Russian Carnegie Research Center’s Religion, Society, and Security Program, described Bashar al-Assad in comments to the Russian Kommersant newspaper, which is close to the Russian government, as “the dog’s tail.”

Since the start of the Russian strikes in Syria at the end of last September, pictures of Putin have spread in large numbers in areas loyal to the regime, and in marches organized by regime agencies in support of the Russian intervention. It seems some loyalists have begun to prefer Putin to Assad, to the extent that some have started write “Putin” on their storefronts, as in Tartous, where a regime loyalist placed the Russian president’s name on the cafe he owns.

Pictures of the Russian president have also appeared at the entrances to cities which regime forces still control, notably Lattakia, where a Russia military base “provides security” for residents of the province, according to the Lebanese newspaper al-Akhbar’s Tuesday edition.

The pro-Assad paper said: “On the outskirts of the city of Lattakia on the Syrian coast, the features of a new story are beginning. Pictures of President Bashar al-Assad and Hezbollah Secretary-General Hassan Nasrallah, which have long filled the crossroads along the international highway between Jebla and al-Qardaha up to the entrance of the city of Lattakia, include new amendments. The Russian President Vladimir Putin has appeared in the scene in force, his picture added to the previous images, demonstrating the depth of changes occurring on the Syrian coast.”

The paper noted that residents of the province, where a large number of regime loyalists reside, have started to feel that in Lattakia they are “under the Russian umbrella,” and say that their feelings of safety led to an increase of real estate prices by 20 percent. It quoted Abu Zaher, a construction materials trader as saying: “the Russian air umbrella means security. And security attracts investors.”

The Syrian opposition considers the Assad regime to no longer be the real authority in Syria, becoming a party whose only real mission is implementing Russian and Iranian agendas. As evidence of that, they point to the deal running between opposition factions and Tehran guaranteeing a truce in the towns of Kefraya and Fua in the Idleb countryside, as well as Zabadani in the Damascus countryside, without regime participation. This view was only strengthened after the absence of its role in the deal which Moscow and Washington reached around a ceasefire in Syria.