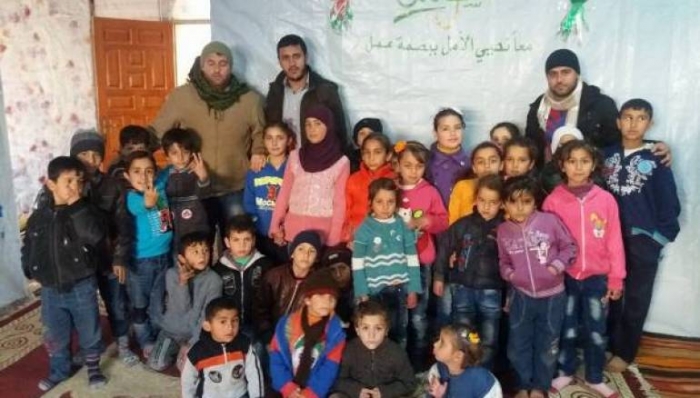 A number of locals in the southern town of Jasim, Daraa countryside, founded a support center for children to help them deal with the trauma of war they have experienced for more than five years.

Bilal Dnaifat, the director of the Basmat Amal (Smile of Hope) center, said the tragic outcomes of the five-year war had pushed many in Jasim to work towards helping lift children out of their current circumstances.

Millions of Syrian children have been subjected to violence by the Assad regime’s cruel war against its own people, especially in Daraa, the cradle of the revolution which erupted after regime intelligence was revealed to have tortured a number of children for painting anti-government graffiti.

Dnaifat explained that all funding for Basmat Amal comes from member’s donations, however, the center requires more support to better help children.

The center has witnessed a positive attendance from people because they have felt an improvement in their children's attitude and behavior, according to Dnaifat.

Malik al-Saho, the secretary of Basmat Amal, explained: “the center provides emotional and psychological support to [those] whom were affected by the war more than others,” noting that activities work on sorting children according to the severity of their conditions,

Children who were severely traumatized are treated and supported by psychiatrists, while other support is given to children with special needs, as well as activities to improve talents by drawing, playing music, acting and dancing, Saho said.

Saho said 20 volunteers are based at the center who specialize in education, psychological and social science, kindergarten, art, and acting.

He confirmed that almost 350 children aged between six and 14 years old are registered in the center and that the number is increasing, but said the center is not sufficiently funded to cope with such large numbers.

The secretary called on local and Arab organizations and philanthropists to support the center’s activities which will reflect on the emotional stability and psychological health of the children.

Events director Yusuf Sawaya said that children at the center practice many activities which seem to be only recreational, “but they aim to reach inside the children to help them in improving their mood and behavior with others.”

He said that the activities help children to integrate with the community especially after the frequent displacement and loss which they have witnessed, as well as the stress of war.

Sawaya mentioned that the center’s experts are working to improve concentration and intelligence in children, as well as conducting activities around cooperation, team work and problem solving.

Kais, 13, says that he is happy in the center because he can enjoy a good time with his friends and engage in lots of useful games. He mentioned that the staff conduct many useful activities and treat children with tenderness, helping children to feel as if they are in their own homes.

Osama, 10, says that he has now found a beautiful place to practice his drawing and where teachers help him to improve his skills, as well as enjoying his time with his new friends.

Aya Firas says that she feels secure when she plays with her friends at the center, as she sees all children are happy there as it is full of nice toys and games, as well as sporting and performance activities.