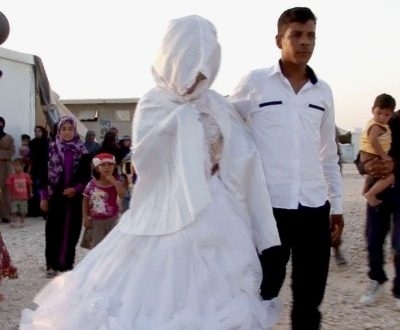 The Syrian crisis has released its burden on the country’s citizens, creating social problems and crises on various levels and affecting life’s details in all their dimensions. One of the most dangerous social concerns may be the rise in the rate of early marriages, spinsterhood, and violence against women, negatively impacting the most basic element of society: the family.

Yaarib al-Dali, an activist in the Homs countryside, told Al-Araby Al-Jadeed that, “During the decades of authoritarian rule, most Syrians suffered from the poor administration. Despite the diversity of the Syrian economy and the country’s abundant resources, the vast majority were suffering from poverty, marginalization and their social ramifications. The uprising against the authorities came and turned into an armed conflict, and these crises exploded.”

He noted that today the rates of early marriage, spinsterhood and violence against women are on the rise, adding: “People believe the rise in spinsterhood is related to the decreasing number of young men, including those who flee abroad or who join the military forces fighting in the country, in addition to the large number who have been killed. This exacerbates the problem and negatively affects young women and families, given the social norms that stigmatize unmarried women, divorcees, or even widows.”

He continued, saying there are no “precise statistics about the issue because of the sensitivity of researching it and the current absence of specialized agencies. But, for example, it is believed that the number of unmarried women between the ages of 25 and 40 in Rastan is about 3,000 out of about 12,500 families, including families displaced from elsewhere in Homs.”

Hanna, a university student, said that the current reality “has caused a lot of worries among a large number of young women who are at the right age to marry. They’re increasingly waiting for the unknown, and the chance has grown that they’ll remain in their family homes.”

She added: “The various old customs in Middle Eastern culture still play a large role in the increase of the number of unmarried women in the region. Many young women are under a crippling blockade and have their freedoms restricted by their families. The issue sometimes reaches the extent that they are beaten if they cross the lines drawn by their families, out of fear they’ll fall into what society deems shameful or forbidden. This might not be anything more than the young woman chatting with a young man.”

Hanna noted that the economic conditions today have become the biggest obstacle for young men. “A lot of young men from good families are hampered by demands from the bride’s family, which they mostly cannot secure. The family is focusing its thinking on how to secure their daughter’s life, and not adding a new person to the family, a son-in-law, who they have to spend on.”

Dali said that, “Rising poverty rates have also increased this phenomenon,” noting that, “The city of Rastan has been under siege and cut off from means of life and suffers from unemployment.”

Activists admit that the proposed solutions have still not been effective. Religious leaders have called for young men who can afford it to marry more than one young woman, in accordance with the law, but those are very few. Therefore there has been talk of working toward raising awareness of the need to ease the marriage process and reducing the demands that fall upon the young men to secure it. Young men are also calling for changes to marriage customs and traditions because of the exceptional circumstances in the country. They believe that working to raise awareness among young men, limiting the suppression they are subjected to, and easing the marriage process could help alleviate this negative social phenomenon.

It should be noted that various areas in Syria suffer from similar social and economic crises, in light of the displacement and migration of half of Syria’s population and the deaths of about half a million people, and the imprisonment, disappearance and kidnapping of a large number of others.