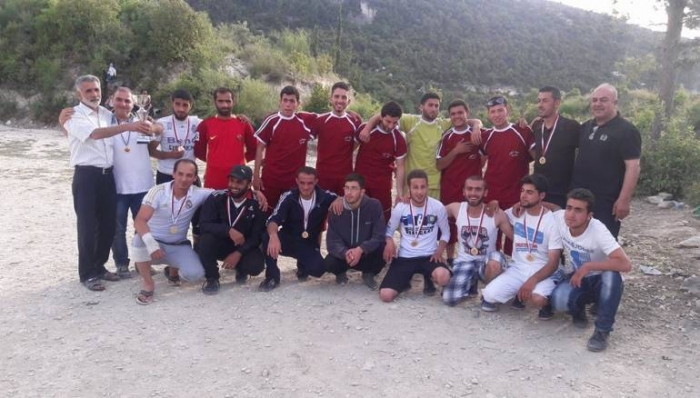 The opposition’s education directorate in Lattakia’s countryside have formed a football league on a field prepared for displaced young men and school students in Bidama, activists said.

“Our young men live under constant military pressure and stress and fear of shelling which reached the Turkish borders,” said head of the directorate Ahmad Yamani. “Most of the participants in the league are school students who need a break after a difficult school year due to repeated displacement.”

Yamani told Zaman al-Wasl: “The shelling with cluster bombs and [regime] and Russian missiles permitted [these forces] to control points in the field, but this will not let them defeat our love for life and will for freedom.”

The official added that the directorate established the league in an unpopulated valley using a bulldozer from one of the rebel factions to pave the playground, constructing the goals out of timber.

The league consists of five football teams with players drawn from schools, camps and nearby villages, as well as some Free Syrian Army fighters.

Yamani said a community organization offered clothes for some players and small financial rewards with medals for the winners. He said the league has drawn considerable interest from locals with many civil defense and rebel representatives attending the matches.