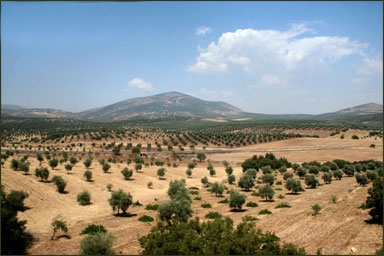 The exporting of Syria’s olive oil to Gulf countries and Europe has led to a doubling in its price within the past three months.

Iqtissad’s correspondent in Homs reported that the price of 16 liters of olive oil is currently selling for 20,000-25,000 Syrian pounds ($90-110) in the north countryside of Homs, up from 13,000 pounds, an increase of almost 100 percent since three months ago.

Oil producer Abou Mustafa told Iqtissad that the continued trade of Syria’s olive oil to Gulf countries and Europe has led to a dramatic rise in its local price, explaining that he was currently preparing to export 300 tones of oil to Saudi Arabia.

In the western countryside of Hama, Syria’s main olive oil producing province, the cost of a can of oil has reached 18,000 pounds.

According to Abou Mustafa, the production of olive oil last year was estimated at 150,000 tones, half of which is consumed inside Syria while the rest is either exported or smuggled to neighboring countries.

On the other hand, farmers in the Homs countryside reported to Iqtissad that olive crops have been affected by unusually cold temperatures in the time of flowering in April and May, which could decrease harvests by up to 30 percent.