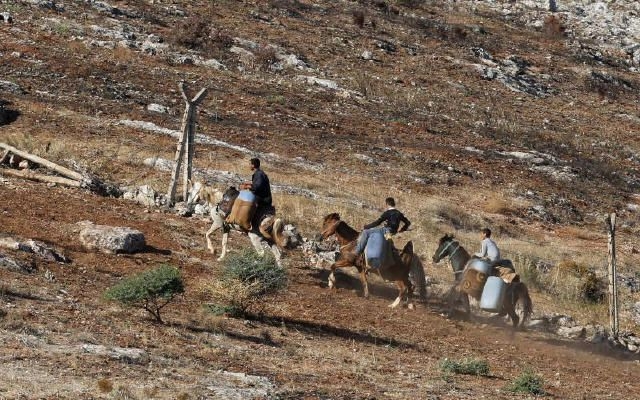 Women and children in the Yarmouk basin are being forced to support their families by smuggling contraband into areas held by Islamic State-linked groups near Syria’s border with Jordan after strict controls were enforced on all fuel and cigarettes.

Ahmed, 11, from a village in the Yarmouk basin told Iqtissad that he travels to the towns of Tasil and Saham, which are controlled by the Free Syrian Army (FSA), when fighting calms down among Jaish Khalid ibn al-Walid army and the FSA.

“I buy as much fuel as I can carry, about 10 liters, and I carry them in a gallon or bottles for fizzy drinks and I sneak through the FSA’s barriers and I sell them in areas controlled by Khalid Bin al-Walid army in villages of Yarmouk basin,” he explained.

Ahmed mentioned that he sometimes travels twice a day to buy fuel, adding that his profits reach about 300 Syrian pounds ($1.30) a liter. He then hands the money to his father who had his leg amputated after an injury and cannot work.

Abullah, 12, one of Ahmed’s friends, said that he sometimes hides fuel in cans of soda among other items while passing through barriers, as it is rare that children are inspected by militants.

He mentioned that he did smuggle cigarettes because the inspection is thorough and the punishment is severe. He explained that he began smuggling fuel and benzene because there was no adult in his family able to work after his father was arrested at Khirbet Ghazaleh a year ago.

Ghiath, 17, confirmed that necessity is the mother of invention, as he began filling gas cylinders with benzene instead, as gas was the only permitted fuel in the area. With one cylinder carrying 25 liters of benzene, Ghiath explained he earns 400 Syrian pounds profit a liter, but said he stopped after guards on the barriers were alerted to his method.

Thuraya, 42, explained that the Sharia clothing and veil are helpful for smuggling and concealing objects, as she used to smuggle benzene and many cigarettes around her waist. She said that small soda bottles are ideal for the task as three bottles make a liter, adding that she can carry up to six liters.

According to Thuraya, many militants at the barriers know the trick, but turn a blind eye because they know citizens are in dire need. But she said guards are very strict on smuggling cigarettes into the Yarmouk basin and have recruited females to inspect women for this purpose.

Thuraya mentioned that she earns about 3,000 pounds per day, but it does not come easily as clashes sometimes take place among factions causing a halt in transport, forcing women or men to remain several days in the villages of Saham and Tasil until conditions calm down.