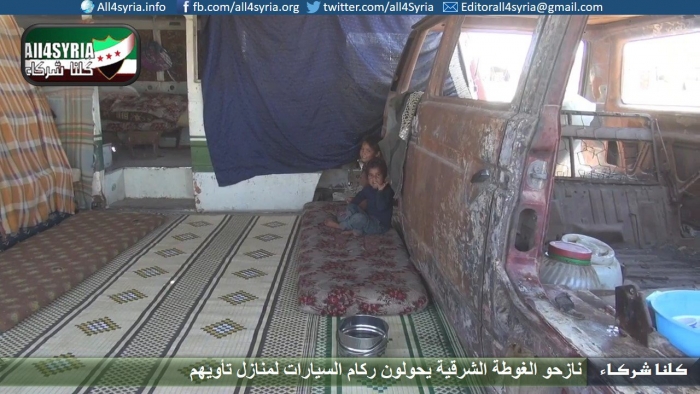 Dozens of displaced families from among the residents of Marj in the Eastern Ghouta have not found roofs to shelter them except the remains of car wrecks that were burned or crashed during the ongoing war in the area.

Under a plastic sheet with its summer heat and winter cold, lives a family of widowed women with their small children, along with a grandmother of 80 years of age.

These harsh humanitarian conditions fall on the human heart exceeding any other pain, especially after hearing the words of one of the mothers, for she is now pregnant in her last month, with twins. She expressed profound concern about her livelihood, saying that she did not know in the coming days if her children will suffer with her in this place or if they will live in a new house and shelter appropriate for two small children and a new mother.

She said that she had suffered from deteriorating health as a pregnant woman and for her two unborn children, and that she is unprepared for the birth. There is also no one who is able to take her to the nearest hospital in light of the lack of transport and known routes.

The situation of the grandmother differs little from the situation of the displaced children. She has lost all her male sons between one area and another and fleeing outside the country, so she remains the one to support and care for the children and the wives, her girls who lost their husbands in the war or to imprisonment.

What you see when you approach is a house made of two medium-sized cars, which were used to transfer passengers, which were hit by air strikes and are now arranged for sitting and living. Kitchenwares are placed in one of the cars to make a small kitchen and the other is a bathroom lit by holes on the walls of the vehicle.

The children who have reached school age have lost access to education and are looking with their families for a living, playing in what remains of their time. The fact that this will result in a generation lacking in education was voiced by the crying child, Yasmine, who could not hide her tears saying, “We’ve lost our schools and our education.”