Bread prices have increased by as much as 300 percent as production witnesses a drop by almost half, activists report 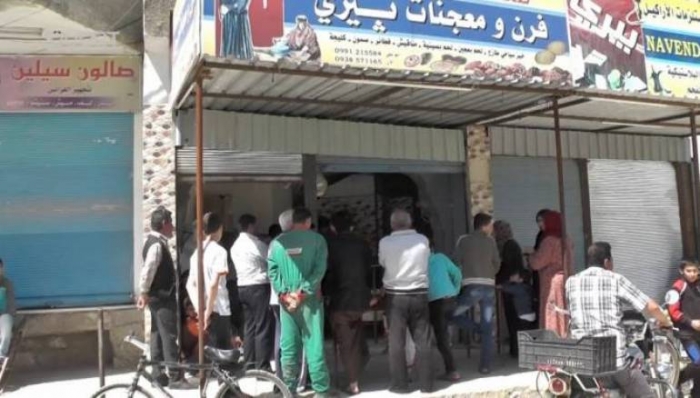 A bread crisis has returned to the northeastern province of Hassakeh over the past few days as prices increased by as much as 300 percent amid a steep drop in production by almost half, local activists reported.

Mahmoud al-Ahmad, an activist, said that the general company mill is under contract with several other mills for producing around 400 tons of flour per day to fulfil the city bakeries’ flour requirements. But the production level has been reduced to almost half because of power shortages.

Ahmad indicated that Hassakeh’s main bakery also stopped functioning in the last few days due to needed “maintenance work,” according to the mills. This has led to a deepening of the crisis and the scarcity bread.

Abou Aziz, a resident of the city of Qamishli, mentioned that his brother has contacts within the regime forces who can provide him with bread for 150 Syrian pounds ($0.7), whereas the official price for a bundle of bread (14 flat loaves) is set at 100 Syrian pounds.

He added that some of his neighbors would go to the bakery at 2:00 am in the morning to buy bread for the set price, but Abou Aziz said he buys his bread from the black market for 300 Syrian pounds a bundle.

Abou Aziz indicated that some residents have resorted to buying the thicker government-subsidized bread, which is usually priced at 100 Syrian pounds for three loaves, but in the current crisis has risen to the same price for two loaves.

Abou Aziz told Iqtissad that in the village of Tel Hamis, in Qamishli’s southern countryside, the price of one bundle of bread has reached as much as 250 Syrian pounds. The crisis has pushed a single kilogram of zero flour, which is not suitable for bread making, to be sold for 150 Syrian pounds.

Meanwhile, the regime and the Kurdish-led administration have promised citizens the crisis will be over in the coming few days with the arrival of flour and power generators for bakeries.

The total amount of the harvested wheat handed over to Qamishli’s trade authorities has reached 441,334 tons according to pro-regime media outlets, down from official production estimates of 700,000 tons.