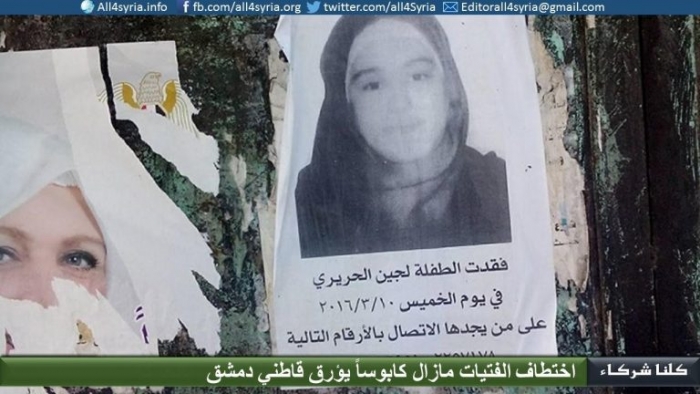 Activists in the capital revealed that the issue of girls being kidnapped in Damascus has once again returned to the fore, with three incidents in two areas being recorded over the last few days.

The activists of the “Voice of the Capital” network said that a woman and her child were kidnapped in one of the regime-controlled districts, while two young girls in their 20s were kidnapped from the Muhajireen area after taking a taxi days ago.

Local news networks have documented successive cases of kidnapping in the districts of Midan and Zahara over the last few months, while it is thought that those responsible for the kidnapping are the security branches and regime loyalist militias in Damascus, according to the network.

The source said that the victims of most of the kidnapping cases which are carried out are young men and women who belong to Damascus families known for their wealth, with the aim of demanding ransom.

Also in this context, All4Syria’s correspondent in the capital reported that regime fighters attempted on Wednesday to sexually assault a woman in the Rukn al-Deen district during raids, inspections and arrests carried out in the neighborhood by the political security bureau.

The correspondent, Mohamed al-Qassim, said the number of members from the branch was small, which forced the group’s officer to distribute them with one member entering each house, rather than four.

In an attempt to cover up the crimes of kidnapping and blackmail of girls in Damascus, which regime loyalist militias are mostly behind, the loyalist newspaper Al-Watan in one of its recently-published issues claimed that many cases of the kidnapping of girls were carried out because of “their desire to blackmail their families.” The report sparked widespread criticism on social media, with even regime loyalists criticizing how the newspaper dealt with the issue.

In its report, the newspaper claimed that the criminal security bureau in Damascus had arrested a number of girls who had claimed to be kidnapped after it became clear that they had carried out the kidnapping to blackmail their own families for money.

It also said that a source in the Interior Ministry had revealed that most cases of kidnapping that were carried out in the Damascus suburbs were fabricated by the girls and even some young men, adding that in one of the cases, a girl fled with a young man because he was her lover. The ministry said the two had delegated another young man to call her father claiming that the girl was kidnapped in order to blackmail him and demand 5 million Syrian pounds ($23,000).

In its report, the loyalist newspaper, which activists described as having nothing to do with the truth, continued by saying that many of the girls aimed to leave Damascus for another province or to areas in the countryside to clearly prove the reality of the kidnapping and delude the family into thinking the incident was real. It added that there were a number of girls carrying out immoral practices and for that reason they wanted to obtain money by any means possible, and so they carry out these incidents which clearly harm the community and force it to live in a state of fear.