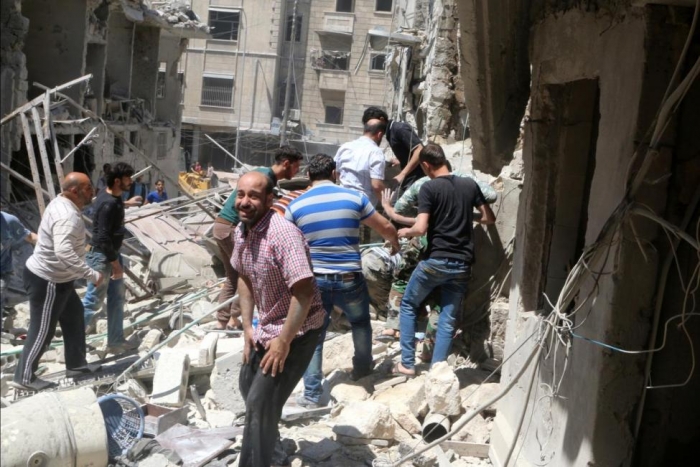 The Iranian Revolutionary Guards Corps incurred severe losses during clashes in Aleppo, as eight militants were killed since the Syrian opposition launched a battle towards the end of July to break the siege imposed on the city.

IRGC’s Defense News Agency announced on Tuesday the death of two of its officers – Gulam Hussein Musawi and Ali Nazri – during the latest clashes in the Syrian city.

With the escalation of fighting in Aleppo, the Syrian regime forces intensified their shelling of nearby towns and villages, especially in Idleb, in an attempt to force the opposition to send reinforcements to the city’s perimeter.

On a different note, the United Nations called for a truce in Aleppo to enable immediate humanitarian relief to besieged residents.

In a statement, the U.N. said: “With more than two million people impacted by the fighting in and around war-ravaged Aleppo, where wide swaths of the area are now without power and water supplies are dwindling, the United Nations today urgently called for a humanitarian pause in the hostilities to enable immediate access to repair the electricity and water networks, and provide assistance to people in need.”

In response, the Syrian opposition said that the U.N. was late to call for a truce and expressed its doubt over the Syrian regime’s willingness to commit to a humanitarian ceasefire should such a step be approved.

In comments to Asharq Al-Awsat newspaper, SOHR Director Rami Abdul-Rahman described the strikes on Idleb as “mere escalatory operations,” adding that the Syrian regime did not achieve any progress on the ground.

SOHR also reported that clashes continued between the Syrian regime and opposition forces in the city of Lattakia.

Abdul-Rahman said that the battles in Lattakia were a means for the Syrian regime to “improve the morale of its soldiers.” He added that most of the fighters were trained by the Russian forces.

SOHR said that a number of civilians were wounded in aerial strikes that targeted Idleb city. It added that raids also targeted the areas of Benech, Saraqib, and Kafar Nubul.