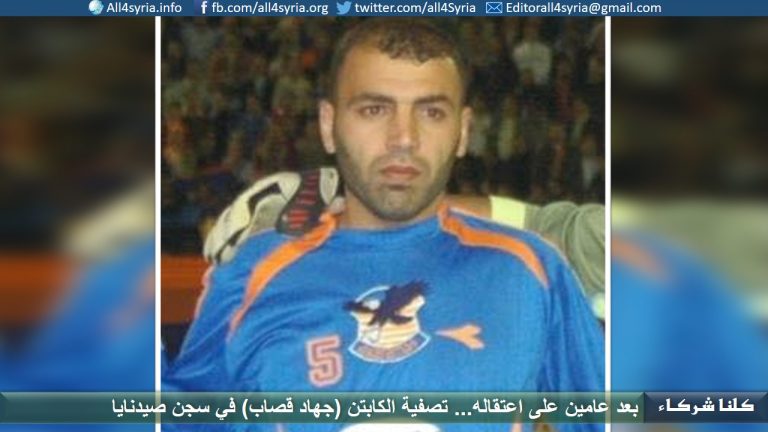 Syrian national soccer player Jihad Qassab died under torture in the regime’s prisons after being arrested two years ago, sources have revealed.

The Homs Media Center confirmed on Friday, September 30, that the regime had killed Qassab in the Saidnaya prison two years after arresting him, and activists reported that news of his death was circulated in the mosques of the besieged Waer district in Homs. His family are yet to receive his body.

Qassab was born in 1975 in Baba Amr in Homs. He was married and a father of two boys and a girl.

The General Authority for Sports and Youth in Syria mourned Qassab’s death on its Facebook page, saying that he had played defense for the Al-Karama club and the national youth, Olympic and men’s teams. He played previously in the Al-Ahd and Shabab al-Sahel Lebanese clubs and the Ajman Emirati club and led the Al-Karama team previously to victories in the club leagues and cup. He played on the team that won the Asian Champions League and the Asian Confederation cup.

The General Authority added: “The martyred Al-Karama team captain Jihad Qassab recorded a number of goals which immortalized his name as a soccer star in the Syrian and Arab fields, most prominently against the Jordanian national team in 1998 as part of the 7th Arab Nations Cup.”

Syrian regime forces arrested Qassab along with engineer Abdel Salaam al-Soufi in Homs on August 19. His name was among the names of the wanted for exchange in the truce of the besieged Waer district. For the past two years, every sports team in free Syria has called for his captors to disclose his fate.

A source quoted a released prisoner as saying that he believed Jihad Qassab was in the regime’s political security branch, and that a problem had occurred when he did not allow an elderly prisoner to be insulted, and was therefore subjected to beatings for more than a full week. Because of this they raised the charges against him from incitement to murdering an officer and robbing him, and then transferred Qassab to the Saidnaya military prison.