State lawyer stresses importance of imposing the maximum punishments against those who commit such crimes as their actions are leading to the disintegration of society and are spreading a dangerous poison. 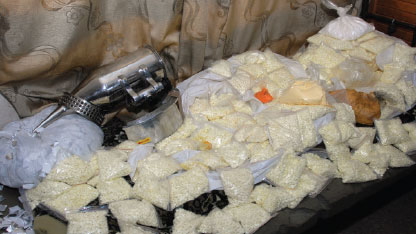 Ahmed al-Bakri, the chairman of the criminal chamber of the court of cassation, said that there is a large increase in the number of drug dealers in Syria and confirmed that drugs are being smuggled in from hot zones because of the absence of the law there which makes it easy to smuggle.

Competent sources confirmed that the seized quantities were very big, for example last month they captured a dealer who was carrying 10kg of hashish and 15,000 Captagon pills. They confirmed that drug dealers are active in many provinces

In a statement to Al-Watan, Bakri said, "the dealers are using the current circumstances and the preoccupation of the competent authorities to promote their poisonous materials." He noted that there are many attempts to promote drugs in Syrian society and that this is very dangerous.

Bakri pointed out that Syria participated with many other countries in arresting members of many active international gangs. He thinks that Syria is still being used on the transport routes of drugs, but that it hasn't turned into an incubator in spite of all the attempts to smuggle the drugs into the country, especially through the borders with Lebanon, Turkey and Jordan. Bakri did not rule out the possibility that some armed men are planting drugs in their areas, especially hashish, in order to increase their income, given the reduced support from external countries.

Bakri confirmed that the Syrian state will not allow the spread of drugs in Syria, and the proof for this is that it is still limited and many dealers who tried to sell it to young people between the ages of 18-24 were captured.

Bakri noted that the anti-drugs law focuses on the issue of smuggling and considers it a crime that threatens social security, which in turn demands maximum punishment.

He pointed out that drug dealing is a dangerous crime that demands heavy punishments, but said it is still less than the punishment for smuggling drugs. He emphasized the importance of imposing the maximum punishments against those who commit such crimes as their actions are leading to the disintegration of society and are spreading a dangerous poison.

Note that the anti-drug law deals with the addict as a victim who needs treatment, while the smuggler and the dealer are considered criminals that must be sentenced to the maximum punishment.