"It is said that even though the province is no longer under the control of the state, it is still under its authority,” top prosecutor explains 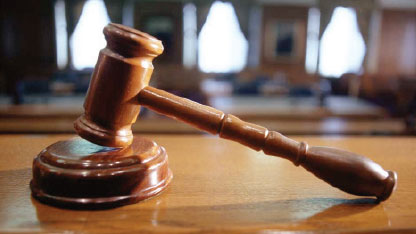 Ziad Sharifi, the attorney general of Idleb announced that state courts will continue to assist with citizens’ personal affairs like marriages, wills, guardianship and other civil issues.

Sharifi told Al-Watan that “the citizens had their role in keeping these courts working especially in the areas of Ariha, Saraqeb, Al-Maara, Abou Aldohor, Khan Sheikhon and Maarat Masreen, because they trust the state courts.” He stressed the importance of having legitimate state courts in the province to protect society from chaos and to protect family lineages.

"It is said that even though the province is no longer under the control of the state, it is still under its authority,” he added, noting that each citizen who attends state court must obey the laws there, which is in fact what is happening.

Sharifi stressed that citizens choose the state courts for their transactions over courts run by armed opposition members, who are often not welcomed by locals, adding that the state courts and judges apply the law.

The head prosecutor pointed out that the people have realized that if the state courts stopped working, there would be widespread chaos, especially in legitimate civil issues that shape personal lives.

He asserted that the courts will close if any of the judges are harassed by armed actors or if the people did not obey the laws.

Sharifi also asserted that it is obvious that the people of the province trust the state courts because they stand against harassment towards the judges, even though armed groups have attempted to prevent them from overseeing the court.

"The Minister of Justice is following up with the work of the courts because it is good for citizens, given that they organize their lives. This indicates that the state is the father and the mother of all Syrians and that each citizen must be given their rights,” he said.