Christians in these areas have also suffered from the Iranian presence, but in a different way from bombardment and destruction like Syria’s other areas, as communities leaving in large part due to a moral collapse and widespread disorder 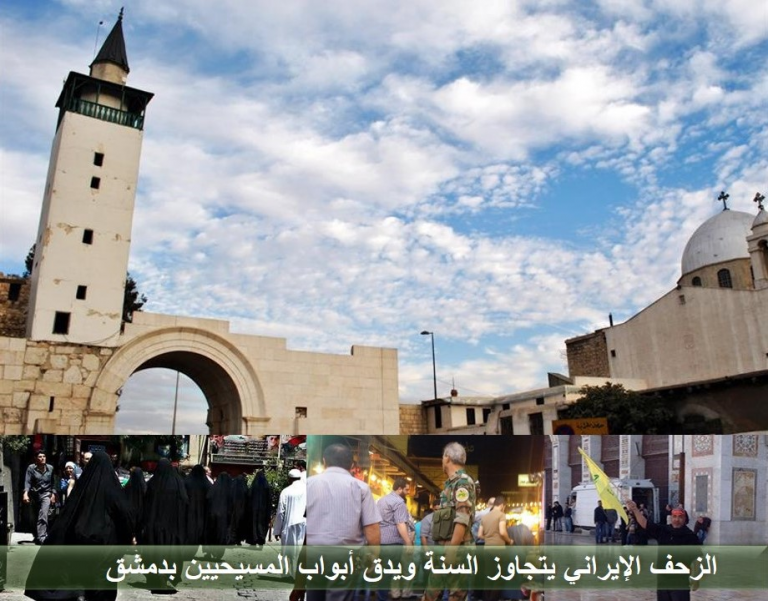 Tehran is in a race with Russia to take over Syria economically, politically, geographically and militarily to prepare for the post-Assad phase, after Moscow signed agreements for the permanent deployment of Russian forces in Syria.

Dr. Rafi Zadih, an Iranian expert on the Syrian issue, revealed that Tehran has a long-term plan to control Syria whether Bashar Assad stays or leaves, with clear signs of this policy visible in the old neighborhoods of Damascus which have been transformed into centers and settlements for Iranian militias.

The Iranian attempts to control Damascus have not stopped at changing the face of the traditionally Sunni neighborhoods, but have also spread to neighborhoods with a historical Christian majority, with residents forced to face all kinds of attempts at displacement.

Christians in these areas have also suffered from the Iranian tide, but in a different way from bombardment and destruction like Syria’s other areas. Communities have been forced to leave because of the moral corruption that the regime and the Iranians have brought to their neighborhoods, transforming the areas into a hotbed of corruption and disorder. The old city has been divided into squares, with each square under the control of a different Iranian faction. These factions prevent the people of Damascus from moving freely for security reasons, which explains why the city’s bars and nightclubs are limited to the areas of Christian majority – especially the area between the Roman Arch to Bab Sharqi. The Christians who have remained in this area consider the Iranian efforts as an attempt to displace them.

Ghassan Shahin, a tourism expert, talked about those attempts which are affecting the Christian population, saying: "This place is sacred due to the harmony between the minarets of the mosques and the church bells, and the co-existence between the Christians and Muslims, which is something that must be protected."

Shahin said in an interview with the Christian-Arab Tele Lumiere channel that the "tourist facilities" that are seen between the Roman Arch and the Zaitoun quarter are immoral facilities and have nothing to do with tourism. “What people see by the doors of these places at night and at dawn is scary and unrelated to our customs.” Shahin said, wondering why these places allowed to work freely.

For her part, Dr. Samira Mbayid sees the current Iranian existence in Syria as an extension of an actual presence that started since the Assad regime took over Syria, adding that many of the regime's policies towards Christians were based on this presence.

Mbayid told the All4Syria website that by looking at the demographic map of Damascus, we can see that what is currently happening has been occurring for decades. She explained that the Christian majority areas were not permitted to expand for over 50 years, part of a systematic plan that aimed to separate these areas and force their Christian residents to move away.

She said that in order for us to understand the Iranian desire to occupy Damascus, we must to go back to the religious history and the symbolism of this area. For example, Bab Touma and Bab Sharqi are a living memory and a legacy of the religions of the East. So-called "Straight Street" is clearly mentioned in the Bible, and it is related to Paul, who fought Christianity at the beginning, but later became one of the religion’s most prominent preachers and church founders.

She added that this is linked to future beliefs that have to do with the upcoming battle between Good and Evil by the Eastern doors of Damascus, which have made this area the target of many battles that are still ongoing. This area is a symbol of civilization’s struggle, the Arab-Islamic armies entered Damascus through Bab Sharqi, where Khalid Bin al-Walid's army met with Abou Ubaidah Ibn al-Jarah's forces that had entered through Bab al-Jabiyah by the White Minaret, which is where the Mariamite Cathedral of Damascus is now located.

A report published by Tele Lumiere said that dozens of Christian families left Old Damascus because their neighborhoods had been turned into a hotbed of nightclubs and immorality.

The station met with Makarios Kaloumi, the priest of Zaitoun Church, who told the story of this immoral phenomenon and described it as a kind of internal terrorism and a hotbed of corruption. He said, "The values are lost, and the historical civilization disappeared and the area turned into a hotbed of corruption."

He added, "We know that there is a systematic displacement of Christians, they are buying their houses and property, which has forced Christians to migrate to much safer countries. However, we will not allow the displacement of the rest of the Christians because of this corruption and immorality after they have survived six years of the Syrian crisis."