“I try as much as I can to organize our money, so that we often go without a meal to reduce our daily spending. My children also share clothes, which they trade between them” 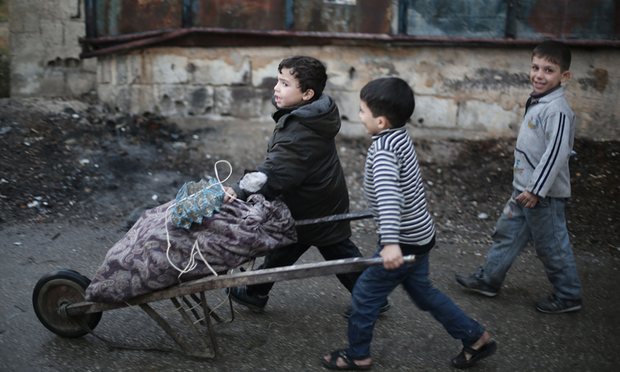 Residents of the areas under siege by the Assad regime and its militias in the northern Homs countryside live a bitter reality in managing their daily needs, as most people exist without work and no source of income, coupled with an increase in the prices of basic food items incompatible with the regular family wage.

Residents have been forced to look for alternatives and solutions which are in line with their reality by lowering their daily nutritional intake and going without many basic needs, especially fuel, for which people have found alternatives by relying on natural power and alternative energy.

Abou Mohamed al-Salah, a man in his 40s and the breadwinner for a family of five, spoke to Alsouria Net about his previous work as a shop owner and truck driver. He said, “My monthly revenues were more than enough to secure the needs of my family. But now, after the regime’s siege of the town of Rastan, I can no longer work on the truck. The regime has also hit the main market in the city and destroyed my shop.”

Salah continued, “My family needs 90,000 Syrian pounds ($420) a month to buy food, clothes and the like to secure our needs at an acceptable level. A gas canister, if it’s available, costs 20,000 pounds, and a bundle of bread costs 300 pounds. This is not to mention that the rest of the food prices have gone up too much for me to be able to afford them.”

He added, “We’ve used wood as an alternative to gas for cooking and heating, and now after two years the price of wood has risen too and we can no longer provide it. The price of one ton has gone up to 80,000 pounds.” He said, “We’ve started to use a new method, the ‘miraculous tin box’, as the people of Rastan like to call it — a jerry can usually used for storing oil or fat — by burning a little straw and nylon bags by moving an air stream over it with a small fan.” This is a good method that can save families a great deal of money, according to Salah.

According to Alsouria Net’s correspondent, many people manage their affairs with much less than the 90,000 pounds Salah mentioned, and some budgets barely exceed 500 pounds ($2.30) a day, while the price of a daily pack of bread is 300 pounds.

Abou Adi works to break up the rooftops of buildings destroyed during bombardments, pulling steel rods from the dilapidated constructions and selling the material. This earns him between 500 and 1,000 pounds a day.

“My work is extremely exhausting from morning until evening,” Abou Adi says, “but I don’t have any other choice. Five hundred pounds can buy my family bread, which is better than nothing.”

Many families have lost their main income earner, which has forced mothers to provide for their children, as with what happened to Omm Hayyan, a widow to a martyr who died during regime bombardment two years ago.

Today Omm Hayyan, a mother of three children, has no income except handouts for orphans given to her by a charity, which is about 60,000 pounds per month.

Omm Hayyan says, “I try as much as I can to organize our money, so that we often go without a meal to reduce our daily spending. My children also share clothes, which they trade between them.”

“We rely on provisions which we prepared in the summer by storing wheat and bulgur and other grains and food that can be stored. But it’s not enough to go on, and we repeatedly have to deal with this during the week,” she said.

About 250,000 people live in the northern Homs countryside, 60 percent of them without work and with no fixed source of income because of the regime’s bombardment of the institutions and markets, from which checkpoints prevent people from leaving by the city’s entrances and exits.