If the soldiers caught someone carrying meat or bread they would throw it away. They used to shout at women and the elderly 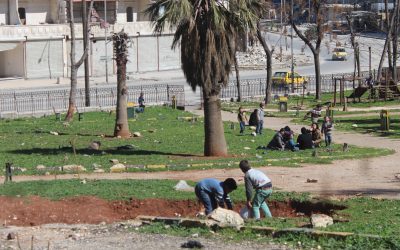 A siege had been imposed on Aleppo on the first day of the month of Ramadan. This crossing separated the areas under the control of the Free Syrian Army and those under regime control.

It was the only access route to the entire city, so, despite the danger, people had to use the crossing to go in search of food.

I was forced to go that way many times to get to Turkey to visit my family who had fled the devastation at home.

Going over that crossing was like a near-death experience. Everything along that route was bloody. Every step pulled you down to the abyss. Sniper fire cut down humans as if they were nothing more than animals on the way to slaughter.

I could not shed a tear, not a single tear, I only gasped for air. I only remember the sound of my breath and the sound of mortars. Breathless, people ran through. You would have thought they were drunk as they sought safety among the crowd or behind human or non-human shields.

Children cried out of thirst and hunger. The sickly were soon wrapped in a piece of cloth to serve as a shroud and taken to burial sites along this death-laden route.

As I walked I tried not to look around me. The scale of destruction was so exhausting. There were only views of complete disfigurement.

One could never pause for a moment on this route. It would have been fatal to stop and reflect on life, there was no time to pause and lament the pain in your heart.

There, death dominated everything.

“Never look back,” I would say. “Do not turn. If I fall next to you do not pick me up. Do not bother asking about me if I die. This is what survival is..

To pass through this crossing, you had to relinquish a part of your own self. And if you survived that time, you had better brace yourself for the return.

Those were sadistic days that will remain engraved in our memory forever.

Despite the hellish scenes, the soldiers manning the checkpoints at each end of the route stood laughing.

It made you wonder what had made them so happy. They gave you the impression that they had got used to living with death nearby.

Civilians were allowed to carry only small amounts of food. If the soldiers caught someone carrying meat or bread they would throw it away. They used to shout at women and the elderly. If they saw children crying they would beat them. They stole from you and at the same time demanded you smile.

The only way to distinguish one army from the other was by the colour of their flags, because both were mere militias fighting in the name of money.

Both armies used the same language of force. I found that to be most puzzling. As I walked down that road I would ponder one pressing question:

At the end of the road waited the guardian of death, although this one was a little gentler. He smiled to see you narrowly escape death, and handed you a pass so that you could leave in peace.

The savagery of those scenes are still with me.

Somehow, it all takes me back to when we were students, when we composed literary pieces describing ruins, history or war. Back then I struggled to describe a scene of conflict or devastation. I had to try hard to interest or indeed touch any reader.

Now painters, poets and writers alike are unable to recreate such images. Their ferocity has burnt the photographer’s lens. No pen can describe them. The pain is universal.