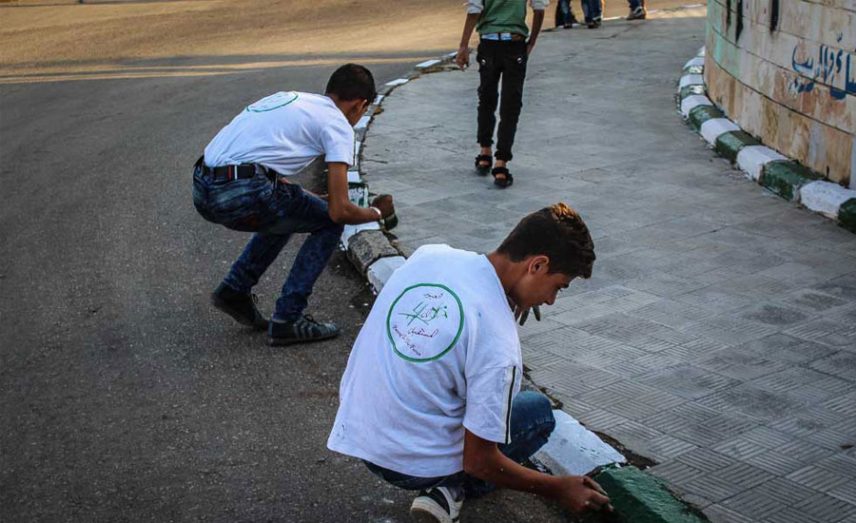 Civilians in southern Syria are witnessing ongoing initiatives to end the suffering experienced by young and old alike. Because children are the most marginalized segment in the war, and because they are the pillars and wealth of the future, a group of female civil activists from the city of Jassam in the western countryside of Daraa province have worked to establish a center to act as bridge for children toward a better life, full of industriousness and activity despite the tragedy.

Ain al-Medina met with Nebal Askar, creator and manager of the “Crossing to the Future Center.” She said: "The founders, the administration and the advisory office began thinking about establishing a center, targeting the 12-18-year-old age group, which is the most important stage in a child's life. In order to achieve their goals, a staff specialized in all fields was hired, as well as a consultant in legal and administrative affairs to oversee the center directly."

Regarding the organization’s beginning, she said: "Under the slogan 'Stronger together' the start of work was announced on 6/8/2016. This date was not just an announcement about the foundation of the center and publicizing it, but ushered in work to achieve the center's vision (a sound community safe from social ailments), and establish its message (the human is the aim, the end, and the means) as a reality. With the center adopting the slogan 'Stronger together' as an official slogan, everyone knows that they are preparing to provide the best in the region, and that they must achieve the tasks they have devoted themselves to achieving."

She added: "The center's aims include getting children out of states of depression and despair afflicting them and get them into a state of optimism for a future they can participate in creating."

Regarding the most important activities that the center organizes, Askar said: "The continuous activities are represented by the educational sectors, which are: the principles of electricity and mechanics; the digital and computer sector; the women's art sector; the illustration sector; the sewing and embroidery sector; the psychological support sector; and the sports and recreation sector. Children have started to be registered in the first training program, and notably they wanted to register in all sectors, which compelled the administration to intervene so that their time was not divided greatly at the expense of their studies, and this and that have been reconciled."

Activities have included the launching of several intellectual and cultural programs. Those responsible for the center have been able to achieve a wonderful balance in usefulness and fun, through the starting of a chess tournament, poetry contests, an activity to paint the pavement, repairing study seats, planting flowers in the city's public garden, and otherwise. Because center's aims include getting children out of depression and despair and leading them to be optimistic about a future they can contribute to creating, the weekly program has taken them to a horse farm and one of the pools to spend time outside their worries. With the start of the school year, the center launched another activity with the aim of improving the students’ Arabic, French and English language, and math.

The first results of this exceptional work appeared in a party which was the biggest of its kind in the region, which both the staff and the children of the Crossing Center worked on and was met with a large response in Jassam and the wider western countryside of Daraa province.