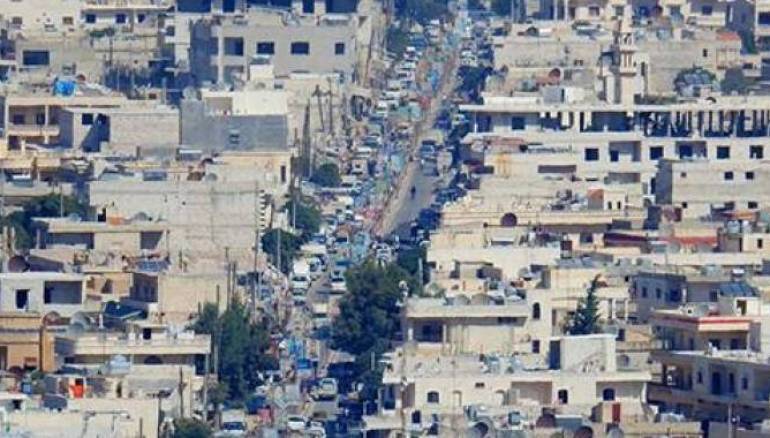 Since the outbreak of the revolution in Syria, the northern town of Sarmada near the Turkish border has been transformed into a commercial hub due to its strategic position near the Bab al-Hawa border crossing.

According to a 2008 population census, Sarmada’s inhabitants numbered just 15,000 people, while a large proportion of the town’s population relied on employment at the border center. The town lacked extensive economic activity, but after the revolution it flourished allowing the number of the town’s inhabitants to expand rapidly.

According to Abed al-Hafiz Lathqani, the spokesperson for the local city council, Sarmada’s changes began with the liberation of the Bab al-Hawa border center by armed opposition factions, heralding the start of extensive commercial trade with Turkey. Town residents would leave Syria and transport goods back from Turkey in their private vehicles because they were unable to access regime areas.

Lathqani clarified that the commercial trade soon expanded to include major traders who sent truck convoys to transport goods from Turkey. Turkish drivers feared to go deeper into Syria due to the bombings, so they would unload their cargo in Sarmada. The city became a collection point and a destination for traders from all other liberated areas, kick starting the domestic trade which turned Sarmada city into a principle center.

He added that the population of Sarmada grew as people moved there for work, trade, and due to the relative safety it offered from regime bombing due to its proximity to the border. The city began to witness strong commercial trade, especially at peak hours when many people from neighboring villages — and even camp residents — come for work or to buy their daily necessities.

Mohammad Waqas, a trader from Sarmada who has been working in the wholesale business for 20 years, confirmed that his business expanded after the liberation of the Bab al-Hawa border crossing, where he began to bring people’s daily necessities such as essential products for living. According to Waqas, Sarmada flourished because it became a trading center and land port providing other areas with food products as it was the only outlet.

Waqas estimated that Sarmada’s commercial trade decreased by around 60 percent after the opposition lost areas in northern Syria. He explained that the main beneficiary of the commercial trading is the big traders, who are from different parts of Syria and have large capital to invest in commerce in Sarmada.

Due to this commercial activity, Sarmada’s job market was invigorated and between 4,000-5,000 laborers, mostly from the local camps in the area, now work at the border crossing point. The laborers are mainly unloading cargo from the commercial trucks coming from Turkey.

Waqas explained that a chamber of commerce was established in Sarmada 18 months ago, including local traders and others coming from different areas in Syria. It handles regulation of trade records as well as coordinating with the Turkish side to facilitate the entry and exit of traders. The chamber is also responsible for examining the quality of products and dealing with the challenges traders face.