Lack of training for women risks putting more than half the population out of work, but why would Syrian society prevent large numbers of its potential human energy from working when it is in dire need of assistance in farming, education, health, and construction? 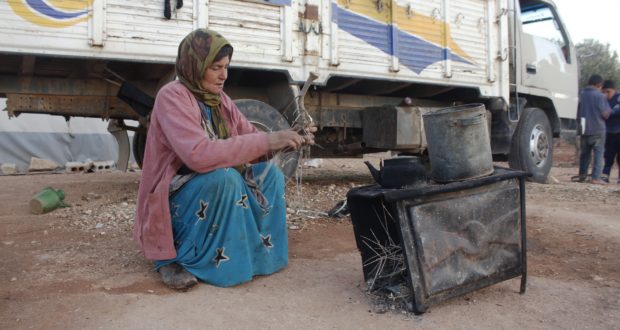 The situation which Syrian women now face after five years of revolution is not hidden from anyone. These are women who have lost a son, a husband or a brother, and may have lost their entire family to a massacre. We are speaking here about women — and speaking about them is an urgent need. Women represent half of society and have moral authority over the other half as mothers and wives. They may be the most affected by this war, as many have been made disabled and are now dependents by virtue of their injury or disability. In all of these instances, women’s responsibilities have increased, in some cases exceeding their abilities.

Unfortunately, the situation on the ground indicates that this majority of women have been on the margins of many social issues, and indeed in many personal issues.

Why would a society prevent two thirds of its human energy from working when it is in dire need of assistance in farming, education, health, and construction?

Umm Mahmoud, a woman in her 60s from the village of Al-Futeira in the southern Idleb countryside, found herself one night forced to care for a baby girl who was her granddaughter through her son, who had left the same day to one of the fronts and then was never heard from again. The child’s mother had fled from her husband to regime-controlled areas not long before his disappearance. Umm Mahmoud said: “I looked for work to take care of myself and the girl, but I didn’t find any. As you see, I’m unable to work inside the agricultural workshops, and here I am, trudging on my weak legs from one health center to another, and from one town to another, to get a pack of free milk to feed this poor child.”

Ilam, 19 years old, is a mother of three infants. Her husband was killed at the front and it has fallen to her to care for the children. As she has not learned any profession because she left her education and her family is poor, Ilam found herself forced to marry the uncle of her children, whom she accepted with great difficulty in order to care for her children and continue to raise them.

Because knowledge is the woman’s weapon which gives her her independence, the situation of educated women is a little better. They are not stuck with only household and marital duties because they understand society’s needs for them, especially in war.

Rania, a woman from the Maarat al-Nouman works in the field of media. But as a woman her professional experience was limited to print and electronic media taking advantage of her previous studies and the experience gained in journalistic writing. Rania says: “Usually what I put in my reports and investigations are general social issues. I may sometimes, hesitantly, put forward women’s issues. There is nothing encouraging you to head in this direction because of the general character which prevails in society regarding women in terms of the narrow margin of involvement, putting her under the scrutiny of the nearest monitor, making her afraid of punishment from the Hisbah (sharia police) as the overseer of their affairs. They are held responsible for what they publish which violates sharia from the viewpoint of this movement.”

Rania continues: “Of course I have a lot of skills to carry out the work of several men in my field, however the current conditions have limited me to working behind a veil and writing articles and reports and sending them through the web. I earn an amount with which I can help my poor family go on in these hard times.”

The civil mobilization, which ignites and fades in concert with the military situation and the nature of the forces controlling the area, has contributed to giving women some role, however limited. Civil society and private organizations, especially those who have chosen social development, training and education as goals, have contributed to giving women a place, although still not in line with their ambitions, as Umm Yasser, one of the volunteers in an organization working in the field of social development, says.

“I was displaced from the northern Hama countryside because I was being pursued by security because of my revolutionary activities in the first year of the revolution, and because I was involved in the revolution’s atmosphere, as was my family. I cannot surrender to the idea that because I am a woman I need to work only in household duties and caring for my children. I am of course from a conservative and religious Syrian family and I know my rights, but I know my rights and duties as a woman well.”

Umm Yasser continues: “The intrusive hardline ideas which currently prevail in society prevent many women from carrying out their duties for the country. We see that we are partners to our brothers in the revolution and intellectually. We can do a great deal — not just to keep up with prevailing cultural conditions, but because our religion gave us these rights and in our history there is a clear image of women as creators and producers since the time of the prophet, peace be upon him, to the present day.”

Umm Yasser faced a great deal of suffering before working as a volunteer on a civil team and her hardships still continue through her work. She is forced to bring her son or ask her husband to accompany her when she needs to visit another area to do her work as a psychological support councilor for women and children. She says: “I was forced to wear a niqab although I do not believe in it, but rather to avoid the harassment I sometimes face. I worked as a manager for an awareness raising project related to women and there were many who came with their men who were waiting outside. However, that did not prevent me from becoming well known in the area for the services which I was providing with my team to women and children in the area. But the prevailing culture of the society around women’s work and which has been strengthened by hardline ideas arriving here has forced me to wear a niqab in order to avoid possible harassment.”

Umm Yasser, Rania and many others have not surrendered to the difficult situation of restrictions and harassment and have tried to work around it to achieve some gains for themselves and for others of their sex.

The past few years have increased the marginalization of women, whether willingly, as in when they give up their right to education and increasing their skills, or out of fear of being subjected to harassment and accusations which has made them prefer staying at home, or unwillingly, because there have been barriers put to their movements and ideas.