Facing discrimination, uncertainty and a lack of work, some Syrian youths are preferring to remain behind instead of migrating from the shores of Turkey to Europe, while others are weighing the cost of returning to Syria altogether, Al Gherbal writes 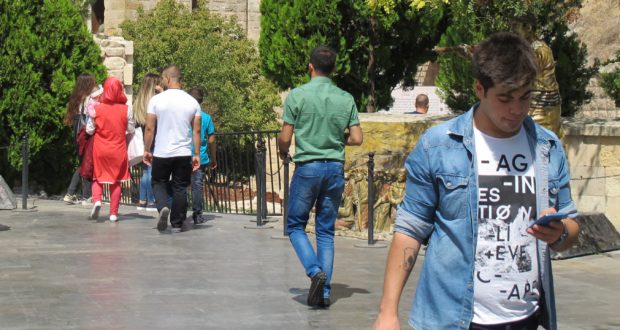 Migrating to Europe, North America or Australia occupies an important place in the thinking of young Syrian men who have been alienated from their country while in Turkey, Lebanon or other neighboring countries, where they face many problems due to the ambiguity of their legal status and difficulty finding work appropriate to their skills.

However, arriving to Europe through smugglers has become almost impossible after the Turkish deal with the EU to close the smuggling routes which had been open between Turkey and Greece and then on to other European countries.

For that reason, the choices of young Syrians are limited to staying put, mostly in Turkey with few opportunities to study and work. The decision to stay put is made easier by news from friends who have traveled to Europe and recalled the difficulties they suffer integrating into society and finding decent work.

Mohamed Darwish, 24, was a law student before working for a humanitarian NGO in the northern Aleppo countryside. But the security and political situation collapsed in Syria, dashing his dreams of returning to university and pushing him to make the decision to migrate. Mohamed says: "The decision was not easy at all. I asked for advice from my friends, and most of them supported me in this choice, especially because I thought I knew what I wanted myself. I thought I would continue my studies."

But Mohamed, who entered Turkey at the start of last year, and then went by sea to Greece to continue his way overland to Germany, did not expect that his opportunities there would be limited to this extent. Mohamed said: "I did not obtain German residency until 10 months after my arrival. I was not able to adjust to my partners in the housing, and I did not have any activity I could do except pass the time on Facebook. During this period, I thought carefully about returning. But I knew that this decision would not benefit me, but rather would delay the steps I was taking, and that I would have to start again after that. I had already lost my job and my savings."

Samir, 37, arrived early to Turkey in 2012 where he was planning to work in his specialty as a philosophy teacher. But after landing in Istanbul he ended up working in a juice shop, and then found an opportunity to work at an aid organization in Gaziantep close to the Syrian border. Samir says: "I'm comfortable with European social life and the style of European thinking, because I lived in Germany for three years before the situation in Syria, and I speak German and English. But the economic situation in Europe isn't like it was before, while the veiled racism spreading there is an important factor making me reluctant to travel. But the most important thing preventing me from going there is that the route is dangerous and I'm not ready for that kind of risk."

Samir believes that the situation in Turkey "is not good for Syrians" and says that "the Turks place barriers on Syrians who attempt to integrate, while a young Syrian can't learn Turkish because learning it takes time and a young Syrian needs to work to make ends meet."

But Samir says that "there are things that can be done to improve the situation of Syrian refugees in Turkey, such as providing integration programs and finding approved legal mechanisms to extend visas. The basic dilemma for Syrians is essentially a legal problem."

Abdullah, 29, a law school graduate, said: "Turkey has gotten better despite all the difficulties although I would have gone to Europe if I had had a few hundred dollars." Abdullah believes that "the dream of Europe is a big lie," as evidenced by his communications with many Syrians in European countries. He says: "Most Syrians I know in Europe don't have the right to work because work requires completing legal arrangements some of which take up to a year and a half to finish. All of them are required to live in a specific place in the country where they are and it's like they're detained."

Abdullah concludes by saying: "I know some people who have returned to Syria to take up arms against the regime. I'm thinking about going back to Syria now and not heading to Europe."