Assyrian and Syriac Christians in Syria describe their situation in two words: “Feeling of injustice” and “exclusion" 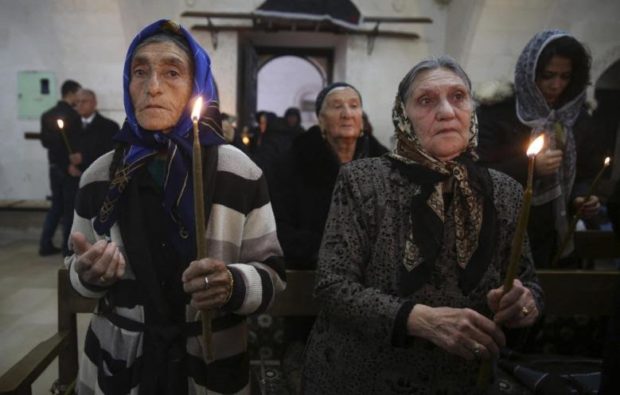 Some of Syria’s Christians fear that their existence in the post-war Syria could be threatened, particularly following the latest political and military developments accompanying the crisis.

Those Christians expressed their worries after they were ruled out from the upcoming Geneva talks as a “Christian element,” and because the Syriac language was not included in the draft constitution that a Russian delegation handed over to representatives of the Syrian regime in Damascus last month to provide equality between Kurdish and Arabic language in local administrative areas.

Also, those Christians fear that the presence of a large military arsenal in the hands of the Kurdish-led Syrian Democratic Forces (SDF) would be later used to force them be part of the next federal regime in northern Syria.

Assyrian and Syriac Christians in Syria describe their situation in two words, a feeling of "injustice” and “exclusion.”

Director of the Assyrian Human Rights Monitor Jamil Diarbakirli explained that in Syria, only the powerful armed groups were referring their cases to the international forums.

Diarbakirli told Asharq Al-Awsat that the Syriac armed factions; currently operating in northern Syria, do not work for the benefit of the Syriac population as a Christian entity in the Middle East because those groups follow orders of the forces financing them, such as the SDF or the National Defense Forces militias.

“Following the war, we will face a problem of the uncontrolled spread of arms,” Diarbakirli warned.

Christians in northern Syria are also concerned about the problem of arms. Suleiman al-Youssef, researcher in Assyrian affairs in Syria told Asharq Al-Awsat: “There are worrying questions related to the fate of the arms carried by the SDF after they crush ISIS.”

However, Ibrahim Ibrahim, a spokesman for a Kurdish political party called the Democratic Union Party in Europe said those Christian fears were the result of ideas implanted by the Baath Party to destroy the confidence of Syrians in each other.

“Those fears are unjustified because things changed and the self-governance guarantees the rights of all parties and therefore, would not allow any force to violate the rights of Syriacs, Assyrians or any other groups,” Ibrahim told Asharq Al-Aswat.