Garbage disposal in the village of Maaret Hormeh is disrupted amidst security concerns, causing hazardous health issues among the helpless residents 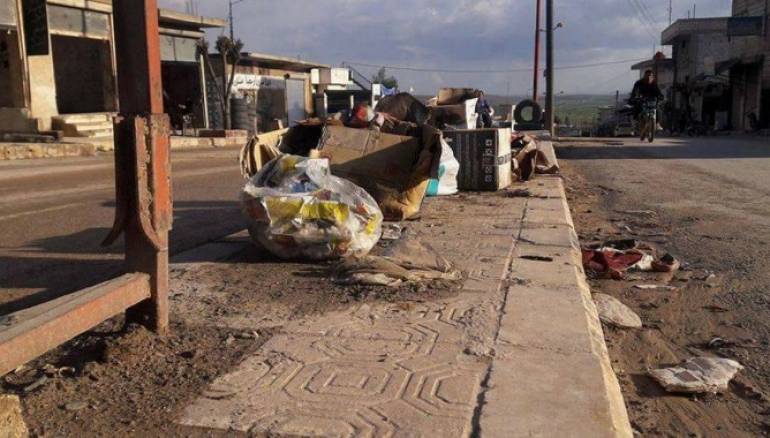 Garbage has turned into a hazardous health issue in the village of Maaret Hormeh in southern countryside of Idleb while the steps taken to address the problem have been largely ineffective.

Maaret Hormeh, a small village about 13 km to the southwest of Maaret al-Numan, is located on the route between south Idleb and the north Hama countryside.

The main reason behind this health crisis in such a small place lies in the difficulty of transporting the garbage to a landfill outside the village.

As piles of unremoved garbage accumulated, harmful parasites spread through flies, leading to the outbreak of many diseases, including leishmaniasis, Abdul-Minem Ismail, the media official on the council of Maaret Hormeh, said.

Ismail noted that lack of funds to cover the cost of the operation to remove the garbage is the primary reason behind the delay in addressing in the problem. He added that the council has no funds to pay workers’ salaries for two months and to cover fuel and maintenance costs of the operation.

Ismail says that among other challenges have been the distant location of the landfill, about 15 km from the village, leading to security concerns preventing the garbage truck from unrestricted access to the dumpsite.

Village residents have started to carry the garbage away from their houses to undesignated landfills around the village, but these individual efforts have not been sufficient to remove the problem.

The cleaning operation originally received support through an initiative called “Tamkin,” but since October that too was terminated on account of financial challenges. According to Ismail, the council has contacted many organizations, but none of them have been receptive to its pleas for help in removing the garbage.

The council even tried to source funds through enforcing taxes on residents, but the villagers were already hard squeezed for money and the collected amount was hardly enough for the operation.

“We are short 300,000 Syrian pounds for workers’ salaries, and 200,000 for fuel and maintenance monthly”, the official detailed.

Ismail said that the problem can be resolved by buying a plot of land near the village and turning it into a landfill for the town without affecting nearby areas, adding that it was necessary to find people to sponsor the cleaning project in order to cover workers’ salaries and the cost of garbage containers.