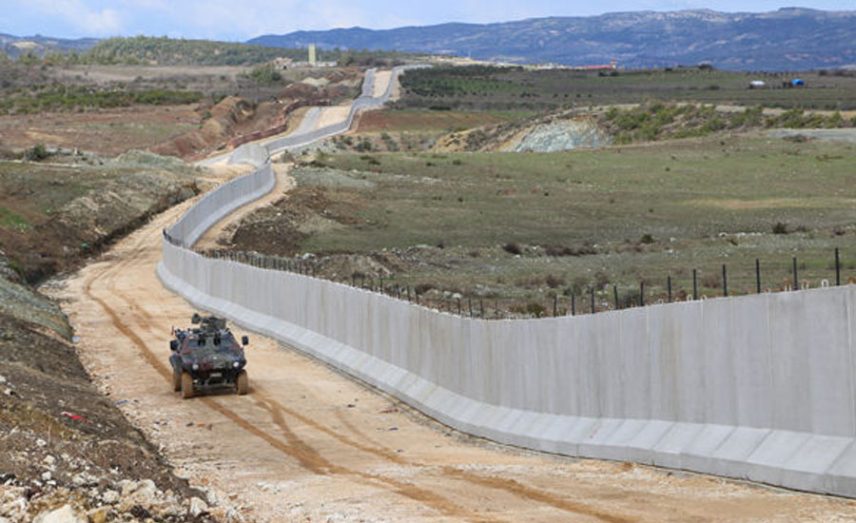 Turkish border guards have ended construction on a major section of a separation wall along the northwestern border with Syria which aims to prevent smuggling and the flow of Syrian refugees into Turkey.

The operation to build the border wall, which was performed without coordination with any Syrian party, was accompanied by accusations against Turkish authorities of penetrating the border in some areas, displacing the old border line, and seizing orchards and hills.

Over the last week, activists published a video clip showing bulldozers accompanied by Turkish soldiers in the village of Hatya in the western Idleb countryside, in which the sound of gunfire and ambulances can be heard. The activists said that the soldiers fired into the air to clear people from the village protesting against their presence.

The SMART news agency quoted sources in the village as saying the Turkish gendarmerie arrested 10 farmers after they objected to the presence of bulldozers on their farmlands to build the separation wall. The sources noted that Turkish bulldozers entered about 700 meters inside the same village on Feb. 22.

A media activist in the Lattakia countryside, who asked not to be named, said that these violations had occurred repeatedly in various agricultural and orchard lands such as the village of Khirbet al-Joz and Al-Hamidiyah, where the Turkish gendarmerie incurred into mountain heights owned by Syrians, in addition to constructing a section of the wall passing 1 kilometer into the village of Aqrabat on the border with Turkey and gouging into other farmlands in Harem and Salqin.

The activist added that in all the farmlands near the border “it is difficult now for the owners to come near or to work in them because of the occasional gunfire,” which has caused losses for dozens of families who depend on the produce from this land to earn their livelihoods.

The Assad regime, through its ambassador in Russia Riyad Haddad, has accused Turkey of incurring 15 km into Syria by clearing the border and taking advantage of the drought of the Afrin river to gouge into an entire strip of Syrian land. The Kurdish Basnews website reported on March 25 that the “Turkish army, through the month of February, cut out of the Sharran area a space of 250 meters and plowed 5,500 olive trees as well as 90 [other] trees in the village of Kardo in the Bulbule area, plus 100 trees in the village of Deir Ballut in the Jandaris area,” quoting activists in the area.

These accusations include various areas in which operations to build the separation wall have been underway since the Turkish authorities began in November 2015. The border wall will reach about 911 kilometers, beginning at the Turkish town of Reyhanli opposite Idleb province.

Turkish developer TOKI has undertaken the task of carrying out the building work, which is expected to end this April with a height reaching 3 meters and a width of 2 meters.

The Turkish authorities have repeatedly denied any attempt to seize Syrian territory and say the wall-building is part of its national security, fighting smuggling operations and the transfer of weapons into its territory. While no politician has commented on the accusations which have recently been raised, a Turkish officer in charge of border security in the village of Khirbet Al-Joz in the Idleb countryside attributed these violations — if any — to security necessities.

Meanwhile, a member of the Revolutionary Command Council rebel alliance in the Lattakia countryside, Majdy Abou Riyyan, believes that this news is exaggerated and that if it has occurred it has not exceeded more than a few meters.

A legal expert living in the city of Antakya, Wael Yahya, said it is the responsibility of official opposition institutions like the Syrian National Coalition and the interim government to follow issues like this.

When questioned on the truth of the Turkish project, Mohamad Yahya Maktabi, a member of the Coalition and its previous secretary-general, said that he did not have enough information about the issue. Other coalition officials who were contacted refused to comment on the matter.