With a recent UN study claiming over one in eight Syrians live below the poverty line, many families have been forced to share homes with rooms of relatives at the expense of privacy and movement 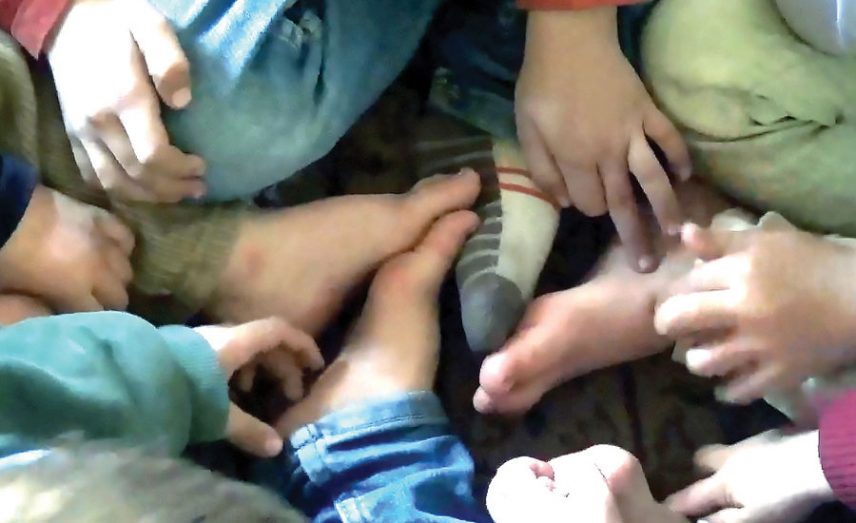 As a result of the heavy bombardment of Syrian territory under the control of opposition groups and the economic crisis which Syrians suffer from, displacement has a prominent place in the internal tragedy.

Many Syrians who have lost their homes or been displaced have been turned into guests in their relatives' homes in other areas of the country or are sharing a single home with their siblings or children, some gathering more than 10 people in two rooms.

Enab Baladi entered the homes of a number of Syrians to shed light on the phenomenon of shared living and its effects.

To play a game, the feet of the 16 grandchildren of Umm Mohamed crowd the mat of the room. One’s hand passes with the rhythm of the song on the feet of his siblings and cousins, with the last falling into the trap of a strike with the end of the song, and the rest falling into a whirl of laughter. Far from the game, a crowd forms in waiting for an appropriate chance to use the bathroom of the house.

Umm Mohamed is one of the women who moved from a relatively comfortable life in the city of Aleppo to a life of displacement in the city of Idleb, and from her own house to a house shared with her five children and their families, coming to experience a way of life that would have seemed unimaginable before.

“Our house has five rooms, and every family lives in one room,” Umm Mohamed tells Enab Baladi. The rooms that she is talking about are divided from each other by cloth curtains, making the wide house seem as if it is a group of adjacent tents, which bring together a mix of events associated with each individual and family and blend them into an overlapping network subject to daily problems.

It seems that the decline of the economic situation for most Syrians is the direct reason pushing more than one family to live in a single home, as a study published by the United Nations in 2016 indicated that 83 percent of Syrians were living under the poverty line inside Syria.

Umm Mohamed pointed to the inability to pay the high rent for houses as the reason that pushed her children to live in one home and share expenses. She added, “If everyone didn’t cooperate, we wouldn’t live in a house.”

The sharing of material burdens does not necessarily mean sharing all the details of life, as Umm Mohamed made clear that the families of her children did not always gather for dinner at one table, and that usually each family prepared its own meal to eat in their room.

From a sociological point of view, this lifestyle could result in various problems and crises in the near and long term. Psychological health and support coordinator at the Syria Bright Future organization, Dr. Ammar Bitar, said that the biggest problem that families face in one house is the loss of individual privacy as a result of sharing the same kitchen, bathroom and living room, which exposes you to others.

Within conservative Syrian society, this “exposure to others” is a major crisis, especially regarding veiled women, who are now forced to live with cousins or husbands of sisters or relatives, which restricts their ability to move.