With help from Turkey, local council and civilians work to rebuild the northern city after rebels pushed out ISIS militants in February, Souriatna writes 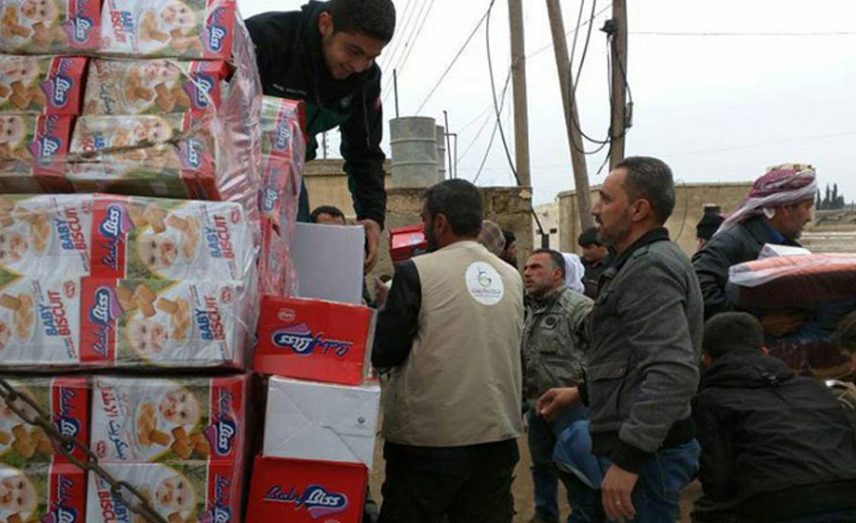 Two and a half months after rebel groups took control of the city of Al-Bab in the eastern Aleppo countryside, the city’s local council and various civil actors have continued their work to restore life to the city after it was ravaged by heavy damage during fighting between Turkish-backed forces and Islamic State (ISIS), which had held the city since 2014.

Since the first moments rebels took control of Al-Bab on Feb. 23, Civil Defense teams began working to remove rubble and dismantle mines, in cooperation with rebel groups in the city and some experts from Turkey, while the local council worked to revive the civil situation through its numerous offices.

The director of the media office in the local council, Ammar Nasser, told Souriatna: “The service office, which is one of the most important offices of the council, started working to carry out its activities in the city in various fields through departments under its authority, including the cleaning department, sewage, water, electricity, communications and municipal work. We are still facing many difficulties in implementing service activities in light of the heavy damage inflicted on the infrastructure in the city. The council is exerting great efforts to restore life to Al-Bab.”

Nasser added: “The most prominent difficulties faced by the council’s work and other actors include the removal of rubble and litter, in addition to the many mines which restricted work and which Civil Defense and engineering teams and members of the armed opposition are working to dismantle in cooperation with some experts coming from Turkey. The people of the city are working to restore the infrastructure, and those who can are renovating their houses or removing rubble from in front of their homes and workplaces.”

In terms of electricity, Turkey has made promises to extend power to the city, however nothing has been done in practice yet, while access to water has been fully cut from the city since the regime took control of the villages of Al-Khafsah and Ayn al-Bayda. Nasser said that the city is “dependant on local wells, of which there are 11, while there are five water tanks under the local council providing citizens with water at symbolic prices. There are also other tanks in the city which supply water for 2,500 Syrian pounds for every 10 barrels. There are studies underway for purifying water, with samples being taken from the wells and sent to Turkey, and after that each well will have its own protection methods. There are warnings about a disaster happening with the water issue, as the summer season approaches and the water in the wells is not sufficient.”

Meanwhile, the post office in Al-Bab is still closed due to the presence of mines in sensitive locations. The amount of damage inside the building is still unknown, and so locals rely upon communications through cell phone networks from Turkey, which has fairly good reach, in addition to the internet.

The local council is also working to restore the city’s mosques, as about 25 mosques were damaged in full or in part, out of an original 100 mosques in the city. This is being done in cooperation with residents and Turkish religious endowments.

In terms of health care, about six centers have been opened in the city, in addition to the Hikmeh hospital. All of them are under the supervision of NGOs and not under the authority of the local council. However, they only supply first aid and physical treatment in light of the lack of equipment and staff. There have been promises from Turkey to establish a large hospital with 300 beds for patients, and the study phase of this project has been finished and it will begin work soon.

Oral polio vaccine campaigns have been launched as well, in coordination with a Syrian vaccination team and the Al-Bab local council, whereby the teams visit homes and deliver vaccinations which are provided by the World Health Organization.

In a related context, the director of the agriculture and animal resources office in the local council, engineer Salah Bulad said, “A vaccination campaign has been launched for animals [sheep, cows] against foot and mouth disease, to be distributed in the city and its rural areas. Sheep and cattle breeders in the city and countryside must attend the agriculture and animal resources office to receive their allotment of vaccinations in order to administer them to animals through a veterinarian.”

The education sector has received major interest from the local council in Al-Bab through its educational office. The council announced on April 3 the reopening of a number of primary and middle schools in the city, as part of a campaign to rebuild the city and revive its institutions.