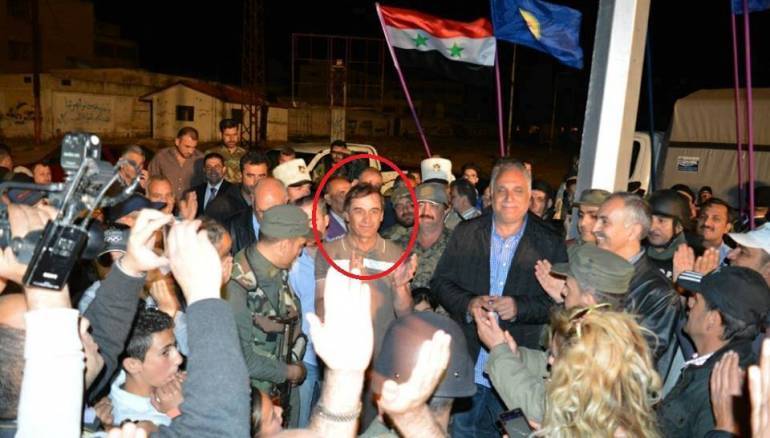 On Sunday evening, the regime announced it had regained control of Al-Waer, the last rebel stronghold in Homs city, through a deal headed by Maj. Gen. Hussam Luka.

But who is Luka, and why did President Bashar al-Assad entrust him with negotiating the biggest deal for the regime in the city of Homs?

Born in the town of Khanasir in the Aleppo countryside of Circassian descent, Luka headed the Political Security Directorate in Homs where he oversaw the torture of opponents in custody.

A retired intelligence officer who served with the negotiator told Zaman al-Wasl that he and Luka served under the command of Rafiq Shehadeh at the Political Branch in Damascus.

Shehadeh, who was a personal guard to late President Hafaz al-Assad, was known for his eloquence and brutality, and is rumored to have killed a top intelligence official in a dispute in 2015.

The dissident intelligence officer noted that Luka is close to Brig. Gen. Suhail Hassan, a top regime military official and commander of the Tiger Forces.

Luka served for many years before and during the revolution as head of the Political Security branch in Homs, enabling him to build a strong and extensive network of relationships. He returned to Homs with greater vigor recently as assistant to the General Intelligence Directorate.

A source pointed out that Luka is well known for his his corruption, and even had a strong relationship with the former governor of Homs, Iyad Ghazal, who was called on to step down by the people of Homs in the first days of peaceful protests.

Luka is one of the first Syrian officers to be listed on the Western sanctions list, possibly for his role leading brutal practices while heading the Political Security Directorate over a number of years of the revolution.

In the autumn of 2015, he was accused of participating in a massacre in the Al-Waer neighborhood, where a playground for young children was bombed and 19 people, including 14 minors, were killed. The same neighborhood he was recently tasked with negotiating a settlement deal with.