Increased tensions erupt on Iraq-Syria-Jordan triangle as the U.S. and Iran vie for control of the strategic border area, opposition website writes 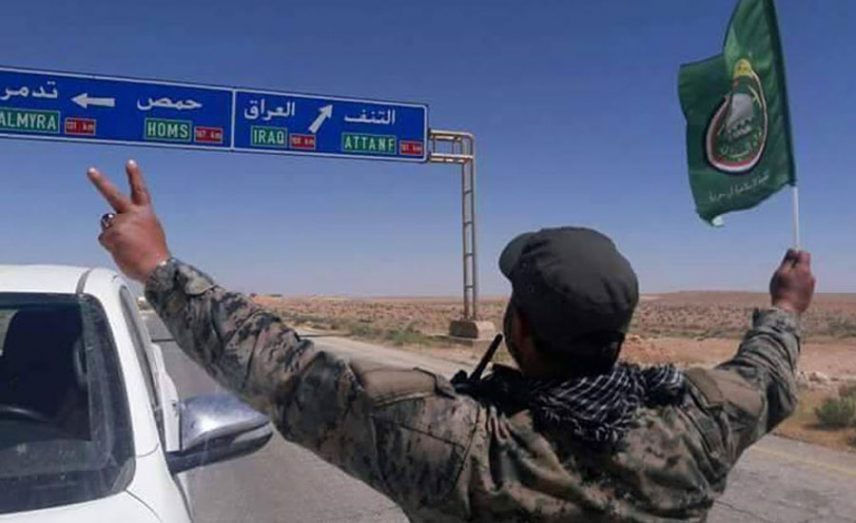 Recent developments witnessed along the Damascus-Baghdad highway have sparked widespread interest among political experts and analysts, gathered around the fact that this vital artery has seen an accelerating race between the United States and its allies on one side and Iran and its militias on the other to take control over it and subsequently take the keys to Deir-ez-Zor.

The United States and Britain, the two most prominent countries in the international coalition against Islamic State (ISIS), have relied on the Al-Tanf border crossing with Iraq as a military base to train Free Syrian Army groups, most prominently the Revolutionary Commando Army, and as a base to launch operations against the extremist group.

The Deir-ez-Zor gateway and Jordan belt

Differences in aims and a mutual insistence on controlling the desert has appeared in the American-Iranian contest for the Al-Tanf road, with U.S. efforts focusing on the development and extension of the military base for two main purposes. First, for Al-Tanf to be an active gateway to the Abu Kamal area in the eastern Deir-ez-Zor countryside, and then to be a key to the collapse of ISIS, and second, as a security belt for Jordan along its northern border, to confront the threat of ISIS expanding or possible Iranian penetration.

The Free Syrian Army groups, with the backing of coalition forces, have carried out reconnaissance attacks from Al-Tanf toward the Hemeima area, the southern Abu Kamal gateway, over the last week. A source from the Revolutionary Commandos told Enab Baladi that the reconnaissance came as an prelude to broad operations against ISIS in Abu Kamal.

Washington and its allies are trying to bolster their military presence in Al-Tanf in coordination with the Iraqis and Jordanians, to make the region into a security belt against any future threat to Jordan from its northern border, represented by these two risks.

Iran is sparing no effort to expand toward Al-Tanf, for radically different aims than Washington, as its control over the road connecting Damascus and Baghdad on the Syrian side would effectively mean controlling the land route between the Syrian capital and Tehran. This would guarantee the military reinforcements by land to its ally President Bashar al-Assad and the Lebanese, Iraqi and Afghan militias which are doctrinally and militarily under its authority.

Tehran has a great chance, as if it takes Al-Tanf by entering from Deir-ez-Zor through Abu Kamal as well, rather than the international coalition and the opposition groups it supports, this would offer a new opportunity to control the existing crossing (opposite Abu Kamal on the Iraqi side). This follows recent suggestions by Assad a few days ago about possible joint operations between his forces and foreign militias on the Syrian side and the Iraqi army and Hashad al-Shaabi (Popular Mobilization units) on the Iraqi side.

On the afternoon of Thursday, May 18, international coalition planes attacked a convoy of the Iraqi Martyrs of Sayyid Battalions, which were effectively under the control of the Iranian Revolutionary Guard, on the Baghdad-Damascus road, 27 kilometers from the Al-Tanf base, described by analysts as a message from America to Iran that “Al-Tanf is our base and it will not be your crossing to Tehran.”

However, despite that, the Free Syrian Army has seen an increase in Iraqi and Iranian militia mobilizations in the desert area, concentrated in the Zarqa area, which was bombed by the coalition, while it seems that the Iranians are insistent on expanding toward Al-Tanf, even if it risks a military confrontation with the FSA and the coalition alike.