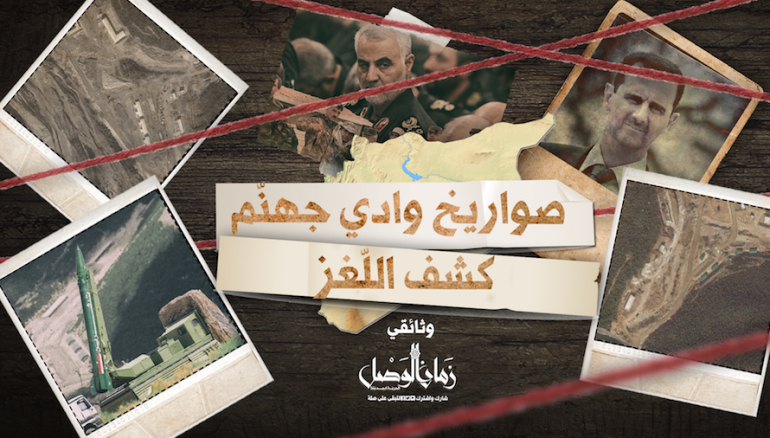 Last month, on June 26, regime media published photos and reports showing the Syrian president’s trip to the Hama countryside, where he paid surprise visits to wounded army soldiers in their homes.

Bashar al-Assad's visit came as part of a three-day tour that began with Eid al-Fitr prayers in a Hama mosque and concluded with a visit to the Russian Hmeimim airbase in neighboring Lattakia.

But the photos and reports published by the regime hide the planned nature of the visit. As behind these scenes is another story that on the surface ignited a media war while at its core is a strategic battle. The media coverage of Assad's trip did not cover his visit to the most important and dangerous center for the manufacture and development of long-range missiles with Iranian expertise.

On June 28, Zaman al-Wasl published information from well-informed sources about the secret visit to a long-range and ballistic missile manufacturing site, inside a covert facility in Wadi Jehanam.

The revelations about the facility echoed widely in Western media, with The Washington Free Beacon citing Zaman al-Wasl in its reporting on the story.

The U.S. coverage prompted Russian media to deny the reports, with the Kremlin’s Sputnik news site attempting to discredit the claims, possibly due to the claims implicating Russian and North Korean experts in operations to develop the missiles. As a result, the Russian outlet described Zaman al-Wasl as belonging to the extremist Syrian opposition.

The facility lies within a fortified area about 15 kilometers east of the town of Banyias, within a rugged valley known as Wadi Jehanam, or “Hell Valley,” and is located on the outskirts of several towns, including Anazah, Nahl, Alaiqat and Ghansala.

Analysis of Google Earth satellite images confirms the existence of the facility. Surprisingly, the images dating back to early 2017 do not show military buildings which appear in the recent images taken from a nearby military area.

Sources speculate that the development of a missile facility in this location, close to loyalist villages, is a move to complete the transfer of strategic military facilities to the Syrian coastal areas with a pro-regime majority. The move is likely part of a years-long regime plan following its failure to hold control of many areas, including those hosting military facilities and important research centers.