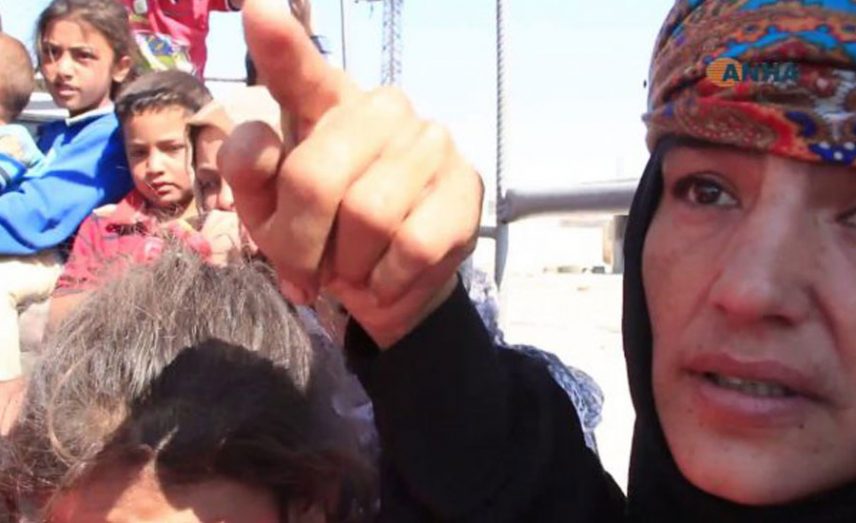 Death and destruction prevail over the city of Raqqa which has been transformed, according to survivor accounts, to rubble in a tragedy for a city that has paid the price of absurd wars which have caused disaster beyond description. Meanwhile, the warplanes of the international coalition continue to destroy the eastern city over the heads of tens of thousands of civilians who have been turned into fuel for a battle that is approaching its third month without any sign of a military solution.

Back and forth battles are still continuing inside Raqqa between the Syrian Democratic Forces (SDF) and the Islamic State organization, which has begun to lose important positions in the city as the result of the U.S.-led international coalition’s indiscriminate bombardment — a bombardment which has turned most of the city into rubble, bringing to mind the disastrous scenario of the Iraqi city of Mosul.

The SDF of which the Kurdish People’s Protection Units (YPG) comprise the main backbone, are trying to take control of the city center by mobilizing from two sides: east, coming from Mansour street, and west, coming from the Al-Thakana district, so that the two forces meet in the center, surrounding the ISIS militants in the northern section of the city, which includes the bases of Division 17, a haven for the radical group.

Sources in the SDF said on Wednesday that they had surrounded the Derayia and Marour districts entirely on the western side of the city of Raqqa, saying that they had killed about 18 militants from the group during their attempt to escape the blockade. They said that the area was still seeing clashes and that the SDF had since the beginning of the battle for Raqqa on June 6 torn control of a number of districts, as well as areas outside the city.

It also took control of the most important streets in the center, most prominently Al-Quwatli street, which has been subjected to heavy damage according to local activists who published images on social media showing the destruction. Al-Mansour street was also heavily damaged near the National Museum after the SDF managed to take full control of the clocktower roundabout, one of the most prominent squares in the city center, which confirms the ferocity of the fighting ongoing in the city.

The remaining ISIS fighters are trying to inflict heavy losses on the attacking forces, and the group’s fighters no longer have a choice but to fight until death after being surrounded in the city center, where the international coalition has not left them any route to escape.

The city of Raqqa, which ISIS has controlled since the start of 2014, extends a distance of about eight kilometers from the east to west and four kilometers from south to north, and includes more than 20 districts or attributed to families inhabiting them, which have mostly been fully destroyed.

Meanwhile, more than 20,000 civilians have paid the price of the costliest battles, as hardly a day passes without dozens dying, including in strikes by the coalition, which has chosen the Mosul scenario based on a scorched earth policy to prepare the way for the attacking forces.

The Raqqa is Being Slaughtered Silently campaign, which documents violations in the province, said that an entire family, most of them women and children, was killed by a coalition bomb. It said their fate seemed to be entirely indifferent to that of Raqqa’s civilians, who have been turned into human shields by ISIS. The coalition planes have destroyed the city’s vital facilities entirely, most recently the Al-Mowasat hospital, which was destroyed on Wednesday with an air strike, joining most of the health centers in the city which have been turned to rubble, most prominently the National Hospital.

Local sources who have recently left the city and settled in the Ain Issa camps say that what has made it to the media about what has happened and is happening in Raqqa “does not reflect the size of the tragedy,” adding in an interview with Sada al-Sham: “What is happening is beyond description, and when the battle ends the world will know the extent of the tragedy. Those remaining in Raqqa face a variety of deaths, as there has been no water, no food, no medicine and no electricity for more than two months as a result of the siege imposed by the SDF on the city.”

The landmines laid by ISIS have stopped dozens of civilians trying to flee death by bombardment and hunger to areas under SDF control, and each day Raqqa activists report the names of the victims of mines. Not far from Raqqa city, no less fierce battles are ongoing in the southeastern countryside, where regime forces and Iranian militias supporting it are trying to take control of the towns of Maadan and Sabkha from the ISIS group on its way to western Deir-ez-Zor. Regime forces on Wednesday proceeded to use chemical weapons — according to local sources — against the group’s militants in the village of Al-Ghanem, which led to the deaths of 30 fighters. The group has tried to stop the advance of regime forces to Deir-ez-Zor, where the town of Maadan acts as the gate to the city which is largely under the control of the organization.