Despite receiving little help from opposition bodies, the city of Banash is optimistic its schools can begin teaching again — if only the bombing would end 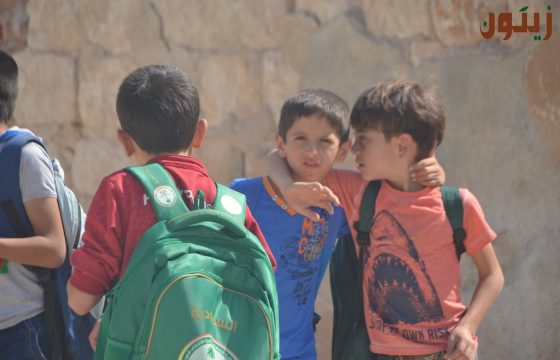 With the start of the school year and the increase in the number of students, residents of Banash in Idleb had high hopes for the education process in the city in light of the relative calm which it had witnessed, despite the absence of a Free Education Directorate. This was before the recent aerial bombardment which began to target the province.

Mohamad Alloush, a resident of Banash, said the education process would see a notable improvement compared with last year in the event that there was calm and the bombardment stopped. However, he added, teachers would need to help students catch up to the level of schooling they missed during the last year.

Ghassan Khasna, a Banash resident, told Zeitoun: “We cannot assess the education process at the current time because we are still at the start of the school year. However, I expect that it will improve because of the calm which the city is currently seeing.”

Khansa said that the demand for registering students this year was much higher than in previous school years, putting the reason down to the increase of residents in the city.

“The school is fully staffed and completely ready, unlike last year, when the school suffered from a lack of teachers," the director of Mamdouh Shaib Secondary School for Boys, Abdel Azeem Hajj Sutaifi, told Zeitoun.

Hajj Sutaifi said that the school had not received any aid or contributions from the Free Education Directorate so far, and that all repairs and preparations which had been carried out were done by faculty members. He added that the directorate had not supplied the school with textbooks.

The administration and faculty of the local secondary school for girls removed rubble from the school and repaired damage to the classrooms before the start of classes, according to its director, Sawsan Mohamad, who also reported that no help from the directorate had been provided.

Mohamad told Zeitoun: “We have not received any aid from any entity or organization, nor even support from the Education Directorate. The school is in need of many repairs and we have tried to renovate what we can, but we still lack a lot, as the school is in need of windows and doors and chairs, in addition to the fact that there are more than five classrooms on the upper floor that were hit by artillery fire, and the roof needs repair and renovation.”

Mohamad added: “Last year we did not need classrooms on the upper floor, but this year the number of students at the school has increased and so we need to repair the damaged classrooms.”

With the start of the current school year, a volunteer charity coordinated with the Free Education Directorate in Idleb to open the Nukhba School for Orphans on Sept. 17.

The director of the Nukhba school, Nahi Falaha, told Zeitoun: “We opened the Nukhba school for children of martyrs and prisoners with the aim of ensuring their care and educating them in the primary education stage."

She added that she received 420 students in the first week of registration, adding that the school would be staffed by 13 teachers, including five who hold university degrees in fields of mathematics, science, Arabic and English.

"We have received promises from the education directorate to supply textbooks to the school,” she said.