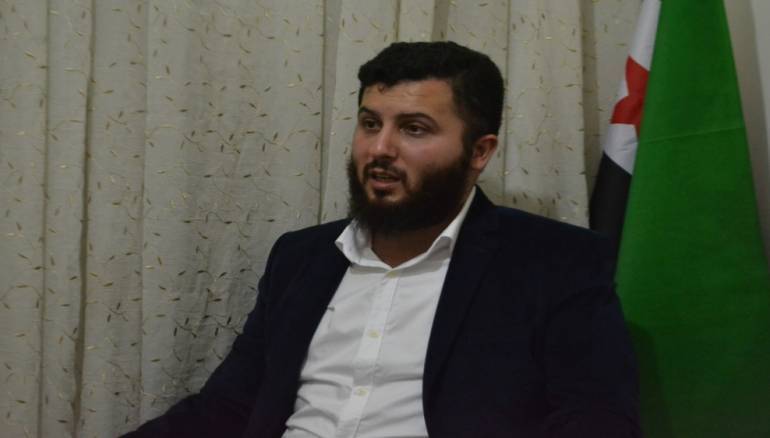 A spokesman in the Mutasim Brigade, a key rebel group in the Euphrates Shield alliance, expressed hope that Hay'at Tahrir al-Sham (HTS) will handover its positions to the Turkish army in order to implement the cease-fire deal and avoid any military escalation.

In an interview with Zaman al-Wasl, head of the political office Mustafa Segri said that the United States is backing the Turkish operation in northern Syria, despite providing no military support so far.

The operation in northwestern Syria, which borders Turkey’s Hatay province, was launched on Sunday under a deal agreed between Russia, Turkey and Iran at the recent peace talks in Astana.

Below are excerpts of the interview with Segri:

What is your role as a Free Syrian Army faction in the Euphrates Shield in the forthcoming operations in Idleb?

What we are doing today in Idleb is a rescue operation for the city, to protect its people, stop foreign projects, and [prevent] attacks and destruction on the city under pretext of fighting terrorism.

This is done through the joint operations room between us and our Turkish ally. The FSA has led operations like the Euphrates Shield [in the past] and the same scenario will be repeated in Idleb if necessary. The mission of our Turkish brothers is to provide logistical support and air coverage if we face combat.

Do you think the outcome of the forthcoming operations in Idleb and the removal of HTS (formerly the Nusra Front) will serve the interests of Russia and Iran?

Putting an end to the Nusra Front certainly serves the interests of the Syrian people and its blessed revolution, especially after Nusra was proved to be conspiring against the mujahedeen and the rebel factions in favor of the Iranian project and became one of the tools of the enemies of the Syrian people.

We should not forget what Nusra did, whether it be attacking [rebel] factions, stealing weapons of the mujahedeen, cutting roads, seizing headquarters, refusing to [respect] Shariah [practices], and tarnishing the reputation of the sons and leaders of the revolution. By ending Nusra's control, we have cut the road to projects aspiring to expand and divide Syria with international support.

It is possible the role of the FSA will be neutralized in Idleb and you might be excluded from participating in shaping the future of this city. In such a scenario, what would be your position?

There is no one, including Turkey, capable of neutralizing the FSA and preventing it from imposing its control over Idleb and protecting its people. Turkey would not have intervened if the FSA was not there. We do not deny the support that Turkey has given to us. Nusra-linked media is spreading pure lies and illusions and deceiving their own naive fighters, claiming that there is cooperation between Nusra and Turkey to prevent the FSA from entering. We do not accept that the operations are depicted as mere Turkish will, but it is a Syrian will and Syrian interest first and foremost.

You are close to the United States. Did they contact you and are they ready to provide military support?

The American side contacted us and informed us of their support for the operation, and did not talk about any military support or air cover.

What if HTS decides to fight (against the operation) in Idleb?

The FSA will carry out a wide deployment and re-establish control, ending Nusra's control. It will hand over the observation points to its Turkish ally in order to stabilize the cease-fire, according to the results of Astana 6. We are working to achieve this without any military confrontations on the ground. If Nusra decides to attack and obstruct the deployment and prevent the Turkish army from setting up observation points, it will be answered directly.